A Hall of Famer in Exile: Larry Brown’s Italian Adventure 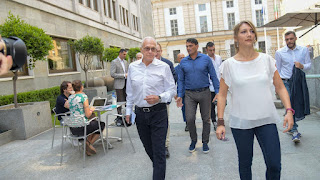 https://www.nytimes.com/2018/11/14/sports/basketball/larry-brown-torino-nba.html?fbclid=IwAR1VPxm6BmXCUYYGUlq4Ky-7oh7mSTF9FuycaxRS5mVZwB4NKEOJZia61KE
Brown’s renowned wanderlust carried him to 15 coaching jobs in a five-decade career. His latest post is in Italy, and, so far, it hasn’t been easy.

TURIN, Italy — Larry Brown has always been something of an enigma. But rarely has he been so misunderstood.
Brown, the Hall of Fame basketball coach, moved to Turin months ago, but he still hasn’t been able to get on the same page as his cleaning lady. The clerks at the grocery store across the street from his apartment giggle when he tries to ask for help. Brown, you see, knows only a few words in Italian, including the ones for shrimp and tuna. He has been eating a lot of tuna.
Now 78, Brown, a former coach of the Knicks, the Nets and more than a dozen other college and pro teams, relocated to Turin over the summer after agreeing to coach Fiat Tor…
Posta un commento
Continua a leggere
Altri post