The Price of Being Pearl: As court wizardry takes its toll on Knicks legend Earl Monroe, NBA union begins to help him & his peers 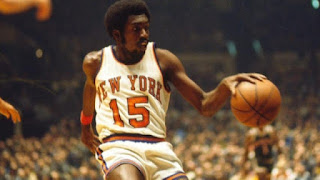 http://www.nydailynews.com/sports/basketball/knicks/earl-monroe-nba-union-finally-helping-peers-article-1.2939217?cid=bitly
BY KEVIN ARMSTRONG
NEW YORK DAILY NEWS Saturday, January 7, 2017
“Every time I move I can feel another surgery coming on,” says Earl Monroe, the former Knick known to most as “Pearl.” He warms a cup of herbal tea, replete with hibiscus, rosehips and wild cherry bark, in the microwave before removing it and taking a sip. He then leans back in his office chair, relaxing in Studio 902, the workspace he keeps for his company, Reverse Spin Entertainment, nine floors above West 39th St. by the Port Authority Bus Terminal. Operations are on his mind, namely the 47 surgeries he has undergone since stepping away from the NBA. He traces scars from his feet to his knees to his hips to the six fused vertebrae in his neck. “What I try to do now is know what I don’t want. One thing I don’t want is a lot of anesthesia in my system. Anesthesia is what kind of kills. I prefer to g…
Posta un commento
Continua a leggere

Who is Marcel Keizer? Marcel Keizer has been appointed as the new head coach of Ajax, but who is the 48-year-old tasked with continuing what Peter Bosz started? Michael Bell gives you the lowdown on the new Ajax boss.

June 17th, 2017
Profile and playing career
Born in Badhoevedorp, Marcel Keizer is the nephew of Ajax and Netherlands legend Piet Keizer. He started his playing career as a midfielder with Ajax but only made four appearances for the firstteam before leaving for Cambuur in 1989. He spent nine years in Leeuwarden, making more than 280 appearances for Cambuur before seeing out his career with De Graafschap and FC Emmen. He retired in 2002.

Coaching career
After retiring, Keizer got his first big coaching role at Eerste Divisie side Telstar, where he spent two years before taking on the role as technical director with Cambuur. Keizer left Leeuwarden to take over at FC Emmen in 2015 but returned to Cambuur after only a few months, this tim…
Posta un commento
Continua a leggere
Altri post