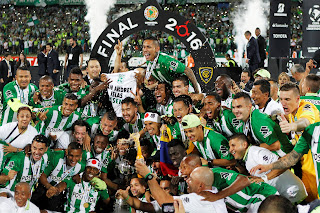 Next stop for the champions of Colombia and now South America is the Club World Cup
WORDS: Carl Worswick World Soccer, December 2016
For now, at least, the debate is dead. Atletico Nacional’s triumph in the 2016 Libertadores Cup shuts the lid on a dispute that has burned for decades between the new kings of South America and rival clubs Millonarios and America de Cali.
All three sides have long made vociferous claims to be Colombia’s biggest and most successful club, but Nacional’s record 15th league title last year, and the lifting of a second Libertadores in July, buries any lingering doubts. For the time being, the crown rests firmly in Medellin.
This has never been just a petty bar-room squabble between supporters for boasting rights. Nor has it been solely about football.
From the advent of professional football in Colombia, the country’s number one sport has been entangled with politics, drug lords, war, power, money and regional identity. And as the country’s three biggest club…
Posta un commento
Continua a leggere
Altri post