JALEN BRUNSON - In the Name of the Son 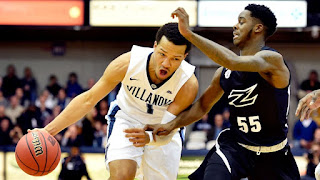 Villanova star JALEN BRUNSON was molded by his exacting father, a former pro whose work was nearly undone by an indiscretion that shook their family

THE WHITE BMW 750 sedan pulled out of the Wachovia Center and headed toward the Walt Whitman
Bridge, leaving the lights of downtown Philadelphia behind. It was Oct. 25, 2006, and the 76ers had just beaten the New Jersey Nets in their last exhibition game.
After the final horn 10-year-old Jalen Brunson retreated to the Philly locker room while his father, reserve point guard Rick Brunson, joined Sixers general manager Billy King in a back office. Later Jalen thought it strange when his dad left the arena without saying goodbye to anybody, trudging silently to the car, but the boy wasn’t concerned. The regular season started in a week, and for the first time all of the Brunsons would spend it in one city. On the drive home to Cherry Hill, N.J., Jalen talked excitedly about opening night.…
Posta un commento
Continua a leggere
Altri post