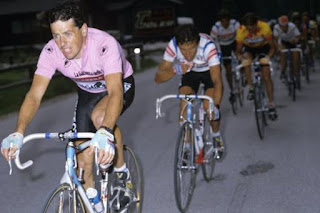 The stats tell you that the 1987 Giro d'Italia was as a pretty dull affair. Three men wore the maglia rosa during the race, two from one team. It sounds processional, boring and dull. But the 1987 Corsa Rosa was a little gem. Grand Tours in which internecine squabbling tears a team apart and yet that team still comes out with one of their riders on top are things of beauty.
by Feargal McKay
@fmk_RoI
Jun 6, 2011, 1:58pm EDT

Look at almost any Italian Tour de France squad that featured both Fausto Coppi and Gino Bartali when the two were at the height of their powers.
Look at the 1962 Vuelta a España when Jacques Anquetil was put to the sword by his own team-mate, Rudi Altig.
Look at the 1962 Giro d'Italia, Nino Defilippis versus Franco Balmamion and the Carpano team being torn apart from within.
Look at the 1986 Tour de France when La Vie Claire's Bernard Hinault messed with his team-mate Greg LeMond's head.
Or look…
Posta un commento
Continua a leggere
Altri post