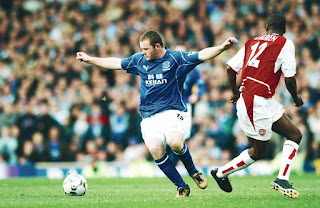 http://thesefootballtimes.co/2017/08/12/what-its-like-to-play-against-wayne-rooney/
by Mark Roberts
The Premier League is back with a bang but few transfers over the summer have divided opinion as much as the return of the prodigal son to Goodison Park. Some people say never go back but some people never say never, so it’s time to see whether Wayne Rooney can remind us all of the formidable force of nature that he used to be.
Over the hill? Past his prime? He’s lived his life in the limelight and answered his critics throughout his career but let’s keep in mind that before the records were broken there was a boy from the streets of Liverpool who was desperate to conquer the world. I know that all too well because I came face to face with that frightening talent. Wayne Rooney is a player who’s not easy to forget.
My first encounter with Rooney was when I was 16. I was playing for Crewe Alexandra’s academy at Bellefield, the old Everton training ground in the West Derby region of Liverp…
Posta un commento
Continua a leggere
Altri post