Real Madrid and Croatia midfield ace Luka Modric is unlikely to ever be heard echoing the words of late, great Liverpool manager Bill Shankly about life, death and the importance of football.
As a child of the Croatian War of Independence his formative years were stained with suffering, and as a result he has always focused on the big picture – the world beyond the wealth, status and glittering prizes of his chosen profession.
While a competitor from head to toe, Modric is an individual of sound perspective; never being discouraged by failure or setback, always taking success in his stride.
Now in his fifth season in Spain, he has certainly enjoyed his time at the Bernabéu, where he is much appreciated for his scintillating approach play and where he has twice won the Champions League, …
Posta un commento
Continua a leggere 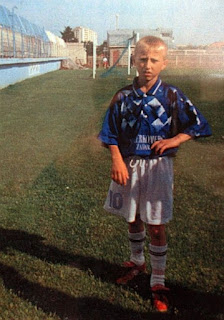 by World Soccer magazine, March 2017
MAY 27, 2005 On loan at Inter Zapresic, a 3-3 draw at Rijeka means they are league runners-up.
MAR 1, 2006 Makes his debut for Croatia in a 3-2 friendly win against Argentina in Basle.
MAY 5, 2006 A 1-0 win over Osijek secures the title in his first full season at Dinamo Zagreb.
AUG 16 , 2006 Scores his first goal for Croatia in a 2-0 win against Italy in Livorno.
OCT 4, 2007 Scores in a 3-2 win at Ajax as Dinamo Zagreb qualify for the UEFA Cup group stage.
MAY 14, 2008 In his last game for Dinamo Zagreb, completes a second successive double with victory over Hajduk Split in the Croatian Cup Final.
JUN 20, 2008 Misses Croatia’s first spot-kick in the penalty shoot-out against Turkey as they lose in the quarter-finals of Euro 2008.
AUG 16 , 2008 After signing for Tottenham Hotspur, his Premier League debut ends with a 2-1 loss at Middlesbrough on the opening day of the season.
MAR…
Posta un commento
Continua a leggere
Altri post