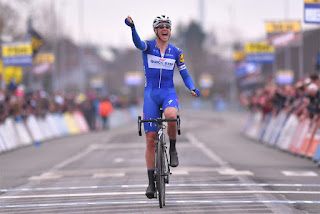 by SAM DANSIE Procycling UK, November 2018
Stefan Küng, Niki Terpstra, André Greipel: some big international names are heading to French teams in 2019. This is good news for those teams and racing in general. High-calibre foreign riders on French teams have been a rarity. After the rash of new signings, Marc Madiot, Groupama-FDJ’s chief complained in L’Equipe that, “For a long time we didn’t have access to these riders. Their agents didn’t come to see me.”
If anything, some of the best French riders looked to foreign teams: Julian Alaphilippe and Warren Barguil’s careers began on Low Countries squads. So what does the change of tide show?
Probably that the French teams have shed their reputation as old school operators who lagged behind on matters of sports science and training. Also that the teams are stable. Ag2r's budget is steady and increasing. At the start of the year, FDJ welcomed Groupama as a headline sponsor on a three-year contract. Direct Energie said it wanted to join…
Posta un commento
Continua a leggere
Altri post