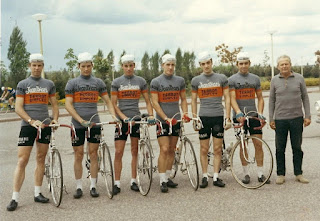 INSIDE THE PARISIAN DREAM FACTORY 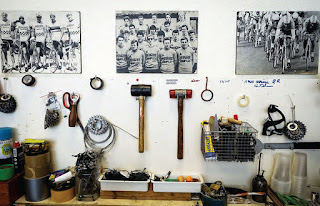 by James Startt
The Cycling Anthology – Volume Four (2014)
Paris, France – The old clubhouse on Rue de Sèvres has long closed down and the team apartments reconverted into private housing. And the lustre has more than faded around the current clubhouse on Rue Yves Kermen, planted ignominiously in the shadows of a Bricorama, a low-cost home supply supermarket on the outskirts of Boulogne-Billancourt, itself a suburb of Paris.
Only the sign over the archway reading Complexe Jacques Anquetilhints at a more glorious past, as does a small selection of trophies on show in the window.
Once inside the current clubhouse of the Athletic Club de Boulogne-Billancourt, the discerning eye will notice other remnants of the club’s zenith. There is the white jersey with red polka dots awarded to the best climber in the Tour de France. Made of wool, it dates back to 1984, when one of the club’s protégés, a certain Robert Millar, became the first Scot to capture such a prize. And then there is a yellow …
Posta un commento
Continua a leggere

A.C.B.B.: THE HOUSE THAT MICKEY BUILT 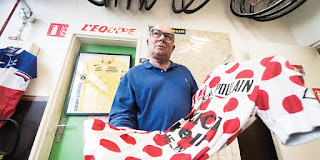 https://pelotonmagazine.com/features/c-b-b-house-mickey-built/
It’s easy to overlook the monochromatic sign of the Complexe Jacques Anquetil on Rue Yves Kermen in the southwest Paris suburb of Boulogne-Billancourt. And it’s easy to overlook the silhouette of trophies in the dusty window of the nondescript side entrance at this aging residential complex that was once considered futuristic. But somehow it’s a fitting home for the Athletic Club Boulogne-Billancourt, or the A.C.B.B. as it is commonly known, a modest amateur cycling team by today’s standards. And yet in its heyday it was the most forward-looking club team in the world. Not only was it consistently the top squad in France but, almost unwittingly, the A.C.B.B. also ushered in the sport’s first significant wave of international racers.
Words/images:  James Startt
Once inside the clubhouse, there are further clues to the team’s glorious past. An aging polka-dot wool jersey collects dust from its hangar on the wall—a memento left…
Posta un commento
Continua a leggere
Altri post