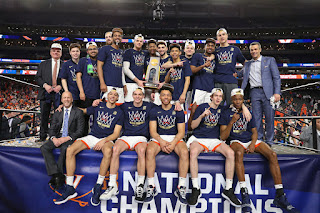 Even with ample motivation (a historic loss) and a re-jiggered offense that was one of the best in the nation, VIRGINIA still needed several doses of March magic to win its first NCAA basketball championship. A week after the title game, the Cavaliers — hailed as heroes at home — reflected on their incredible journey
BY DAN GREENE
Sports Illustrated - Volume 130 / Numbers 8-9, April 22-29, 2019
TONY BENNETT wasn’t making this trip alone. All season Virginia’s mantra had been “united pursuit,” and so on Saturday, April 13, when the coach was summoned to a small stage mounted at the 50‑yard line of Scott Stadium for an official championship celebration, “the architect of it all” did not emerge from the brick‑walled end zone tunnel until the rest of his Cavaliers were in tow. They strolled out in a loose single‑file line behind Bennett, all in matching navy championship T‑shirts, soaking in the roars of some 21,000 fans as their coach, a navy polo tucked neatly into his khakis, repeatedl…
Posta un commento
Continua a leggere
Altri post