A Fan's Notes on Earl Monroe by Woody Allen 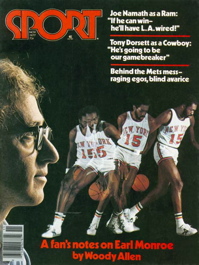 http://reprints.longform.org/a-fans-notes-on-earl-monroe
WOODY ALLEN • SPORT • NOVEMBER 1977
Toward the end of the 1976-77 basketball season, the editors of this magazine [Sport], aware of my interest in the game, called me and asked how I’d feel about covering the NBA playoffs for them. At first the idea seemed provocative, but then the thought of traveling around, and the time required to do a good job, not to mention the disappointment of the Knicks not making the playoffs, rendered the whole notion unappealing. But I said I wouldn’t mind writing something about Earl Monroe, who had given me a great deal of pleasure watching him play over the years. I didn’t really know Monroe, although we had exchanged several sentences on the Madison Square Garden floor two years ago. I was filming a comic sequence for my movie, Annie Hall, in which certain actors, including myself, played basketball against the Knicks. The sequence was later cut from the film because it didn’t come off funny eno…
Posta un commento
Continua a leggere

The 5 Best Stories From Earl Monroe at Drew University

- aprile 05, 2017
https://www.drew.edu/news/2017/04/03/the-5-best-stories-from-earl-monroe-at-drew-university
Basketball Hall of Famer reflects on his mom, the Knicks, Woody Allen.
March 2017 – Basketball Hall of Famer Earl Monroe has a lot of stories to tell.
That became apparent early on during his appearance at Drew University, where the former New York Times sports columnist Ira Berkow asked him about his days as a top college player at Winston-Salem State and as a flashy guard on the Baltimore Bullets and New York Knicks.
Monroe, the guest of Drew Forum’s In the Game speaker series, smiled and laughed about lighter memories and spoke earnestly about past slights and the unwavering support of his “ma.” Here are his five best stories.

A letter from Woody Allen
Monroe was humbled by his first season on the Knicks. He went from being a star on the Baltimore Bullets to riding the bench for months in New York, with his scoring average sliding from 21 to 11 points per game. After year one, however, Knick…
Posta un commento
Continua a leggere
Altri post