EMU: Transferred from Binghamton University prior to the 2015-16 campaign and will have two years of eligibility but will have to sit out the 2015-16 season due to NCAA transfer rules…Binghamton: Appeared in 20 games as a freshman, starting 16...Averaged 10.8 points and 3.5 rebounds per game, shooting 43.7 percent from the floor and 38 percent from beyond the arc...Earned the America East Rookie of the Week honor once, while also posting one double-double on the year...As a sophomore, Madray appeared in 13 games but his season was cut short due to injury...Averaged 7.8 points and 3.5 rebounds per game in those 13 contests, all while picking up 11 blocks...High School: Findlay Prep: Played one season of prep school basketball at Findlay Prep in Las Vegas, Nev...Helped his squad to a 32-1 record, while capturing the 2011-12 ESPN National High School Invitational Championship...Stephen Lewis…
Posta un commento
Continua a leggere

- novembre 30, 2015
Position Guard Height 6-2 Weight 225 Class Jr. Hometown Alpharetta, Ga. Highschool Alpharetta EMU: Transferred from Georgia Highlands College prior to the 2015-16 campaign and will have two years of eligibility…Georgia Highlands: Averaged 17.8 points per game, while pulling down 3.3 rebounds and dishing out 2.4 assists per contest...Was efficient on the offensive end, knocking down 44.4 percent of his attempts from the floor...Appeared in 36 games for the Chargers, helping them to a 30-8 record on the season on his way to earning NJCAA All-American Honorable Mention accolades...Led Georgia Highlands to the semifinals of the 2015 NJCAA Division I Men's National Basketball Championship before falling to the eventual national champion, Northwest Florida State...Appalachian State: Appeared in 22 games, starting in six of them during the 2013-14 campaign...Averaged 6.2 points, the best among Appalachian's freshmen, while also posting two rebounds per game...Scored 10-or-…
Posta un commento
Continua a leggere

- novembre 30, 2015
Position
Guard
Height
6-1
Weight
165
Class
So.
Hometown
Corona, Calif.
Highschool
Corona
EMU: Joined EMU as a freshman prior to the 2014-15 campaign…2014-15: Appeared in 28 games, starting 17 of them...Averaged 3.4 points per game, while pulling down 1.4 rebounds and dishing out 1.8 assists in 14.5 minutes per contest...Posted a career-best 10 points on Dec. 28 versus Concordia...Dished out a career-high seven assists versus Longwood, Nov. 23...Led the team in free throw percentage, knocking down 83.9 percent of his attempts...High School: Four-year letterwinner at Corona High School...Led Corona High School to its first 20-win season since 2005-06 as a senior...Averaged 23.2 points, 5.8 assists, 3.9 steals and 3.7 rebounds per game...Named the Big VIII Co-MVP and earned all-league honors...Garnered Southern Section Second Team honors, while being named the county's most valuable player...Was selected as the all-tournament MVP three times, in addition to three more all-tournament team…
Posta un commento
Continua a leggere

EMU: Transferred to EMU prior to the 2015-16 campaign from the University of Findlay...Findlay: 2014-15: Appeared in eight games...Averaged 5.5 points per game...Grabbed 5.1 rebounds per contest...2013-14: Appeared in 29 games...Averaged 4.6 points per contest...Grabbed 2.3 rebounds per game...Recorded 12 steals...Blocked 11 shots...Shot 52.7 percent from the floor...Scored a season-high 12 points against Marygrove, Nov. 9 and Ohio Dominican, Feb. 6...Pulled down a season-high nine rebounds against Marygrove, Nov. 9...2012-13: Redshirted during his freshman season...High School: Attended Ecorse High School...Named fourth team all-Michigan...Was a two-time MVP of the Motor City Classic...Personal: Full Name: Quaran lyn Jones...Son of Lem Jones and Carolyn Hanson and stepmother Trish Jones.
Posta un commento
Continua a leggere

EMU: Transferred from the University of Nevada Las Vegas after one year and will have four years of eligibility as an Eagle...High School: A four-year varsity letterwinner as a Wildcat at Novi High School in Novi, Mich...Earned the sportsmanship award in each season at Novi...Averaged nine points, 10 rebounds and a block as a senior under head coach Brian Tass...Was a member of the Academic Honor Roll at Novi in all four years...Personal: Full Name: Blake Spencer Brown...Son of John and Diane Griffin...Has one brother, Mason, and a sister, Nyla Griffin...Brown’s cousin, Tony Robertson, played basketball at West Virginia before competing in the NBA for the Atlanta Hawks, Los Angeles Lakes and Golden State Warriors...His uncle, Thomas Lee Robertson, played basketball at Oakland University...Major: Criminal Justice.
Posta un commento
Continua a leggere

- novembre 30, 2015
Position: Forward Height: 6-9 Weight: 195 Class: R-Fr. Hometown: Canton, Mich. Highschool: Canton EMU: Joined EMU prior to the 2014-15 season as a true freshman...2014-15: Redshirted during the 2014-15 campaign...High School: Was a four-year letterwinner at Canton High School...Was the first freshman to play varsity in 20 years at Canton...During his senior season, he earned all-conference, all-area and all-state honors...Was named Canton's MVP, while earning Co-Offensive Player of the Year awards for the Chiefs...Coaches voted him as the team's hardest worker...Named all-conference and all-area during his junior campaign...Led Canton to division, conference and disctrict championships...Was named the Chiefs' Defensive Player of the Year, as well as Co-Offensive Player of the Year...Is the first NCAA Division I basketball student-athlete from Canton High School in 25 years...Personal:Name: Jordan Elijah Nobles...Son of Veronica and Darryl Nobles Sr...Has one br…
Posta un commento
Continua a leggere 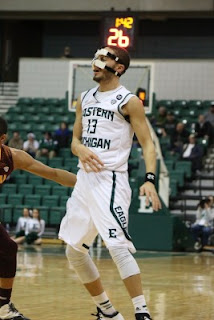 
EMU: Joined EMU as a walk-on before the 2013-14 campaign…2014-15: Earned a scholarship after redshirting during his first season with the team...Appeared in 21 games...Averaged 2.4 points per game in 7.6 minutes per game...Was a spark off the bench in the Eagles' contest at Louisiana-Monroe during the College Basketball Invitational going 4-for-4 from the floor and 2-for-2 from beyond the arc for a career-best 10 points...2013-14: Redshirted during the 2013-14 campaign...High School: Attended Independence High School in Thompson Station, Tenn. where he was an Eagle under Head Coach Greg Glass…Earned a pair of varsity letters…Earned the John Maher Student-Athlete of the Month while attending Independence…Named to the District 11AAA All-Tournament Team…Knocked down the second-most three-pointer's in his district...Was the student body Vice President and an Honor Roll member…Pe…
Posta un commento
Continua a leggere 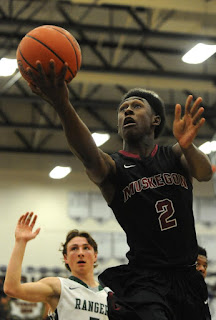 EMU: Joined the Eagles as a walk-on after earning an academic scholarship at EMU prior to the 2015-16 campaign...High School: Played at Muskegon High School for Keith Guy...Averaged 13 points per game for the Big Reds, while knocking down 49 percent of his field goal attempts as a senior...Helped the Big Reds with their run into the Class A state quarterfinals during a season in which Muskegon went 23-2...Earned All-OK Black Conference honors as the Big Reds won the OK Black Conference Championship...Averaged 12 points per game as a junior on his way to a state championship...Personal: Full Name: Daryl Thomas Kirkland II...Son of Daryl and Tonya Kirkland...Has one sister, Trinity...Major: Sports Management.
Posta un commento
Continua a leggere 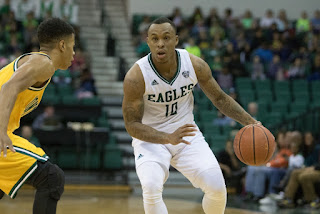 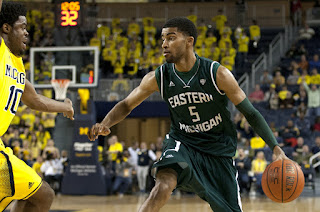 EMU: Joined Eastern after playing one season at DePaul University...2014-15: Appeared in 34 games for EMU, starting in three of them...Posted double-digit scoring affairs in four games...Led the Eagles with 11 points in their victory over Michigan (Dec. 9)...Posted a career-best 13 points in the Eagles game at Miami (Jan. 10)...Had two-or-more blocks in six games...2013-14: Sat out the 2013-14 campaign due to NCAA transfer rules...DePaul: Appeared in eight games for the Blue Demons during the 2012-13 campaign...High School: Ranked 143 Overall on Rivals...Ranked among the class of 2012's top 25 three-point shooters by ESPN.com...Averaged 11.3 points and 4.4 rebounds...Led Detroit Country Day to combined 44-10 record during junior and season seasons with two state semifinal appearances in Class B...Attended the Lebron James Skills Academy...Kno…
Posta un commento
Continua a leggere 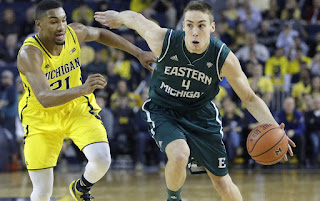 EMU: Transferred from Des Moines Area Community College prior to the 2014-15 campaign…2014-15: Appeared in all 35 games, starting 13 of them...Averaged 3.6 points and 3.5 rebounds per game...Posted a career-best 11 points against Western Michigan (Jan. 31)...Pulled down a career-high eight rebounds on three separate occasions...Recorded three blocks versus Dayton (Dec. 6), for his best block total of the season...Was instrumental in the Eagles' first round win over Miami (March 9) in the MAC Tournament, playing a career-high 35 minutes...Des Moines Area CC: Named an NJCAA Second Team All-American at the Division II level following his sophomore season…He averaged 16.6 points and 7.7 rebounds per game…Led DMACC to a 29-7 overall record and an 11-3 mark in the Iowa Community College Athletic Conference (ICCAC)…The Bears won the regular-season conference championship and also captured the…
Posta un commento
Continua a leggere
Altri post