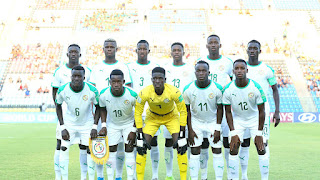 Despite being a heavyweight of African football, this will be Senegal’s maiden appearance at the event. This is all the more surprising given that 18 other African teams have already represented the continent at the U-17 World Cup.
The road to Brazil Senegal will compete in South America in part because of the disqualification of Guinea, but also because of their fine performances at the CAF U-17 Africa Cup of Nations in Tanzania. Although the Young Lions of Teranga narrowly missed out on a semi-final berth there, which would have meant automatic qualification, they nonetheless recorded group stage draws with Morocco and eventual champions Cameroon to finish third in their section behind the aforementioned Guineans. The coach Malick Daf, who was Joseph Koto’s assistant at the FIFA U-20 World Cup New Zealand 2015, is relishing his second outing on the world stage – this time as head coach. A former p…
Posta un commento
Continua a leggere
Altri post