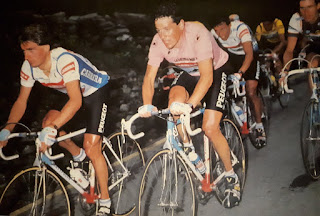 …For all that the 1987 route was more traditional, the composition of the peloton continued to evolve. Professional cycling’s demographic was changing, and the Giro well reflected the fact. Of the 21 nine-man teams to take the start at Sanremo, eight were non-Italian. Three English speakers – Stephen Roche, the introvert Scottish climber Robert Millar and an Australian, Phil Anderson – were amongst those expected to shine, as was the Dutchman Breukink.
Not since Balmamion in 1963 had a native won consecutive giri and, though Italy was running desperately low on grand tour contenders, Visentini was strongly fancied finally to break the hoodoo, particularly if Roche could be persuaded to work in his interests. However those (and there were many) who had predicted that the two would find it difficult to work together remained largely unconvinced, for a number of reasons.
Logic suggested that Visentini, a reigning champion in decent shape, would lead the team for the Gi…
Posta un commento
Continua a leggere
Altri post