- gennaio 16, 2016
AP - Jan 15, 2016 at 12:52p ET
Even after Andrew Smith's basketball career at Butler ended in 2013, he remained an influential part of the program right up until his death from cancer this week.
Looking to halt their early Big East woes, the No. 23 Bulldogs can use Smith's legacy as inspiration Saturday while trying to extend a school-record losing streak for visiting St. John's to 9 games.
A member of Butler's national runner-up teams in 2010 and 2011, the 6-foot-11 (2,09 m) Smith started 103 games and scored 1,147 points in his 4 seasons with the Bulldogs. Smith was diagnosed with an aggressive form of non-Hodgkin lymphoma early in 2014, but still spent time with the Bulldogs (12-4, 1-3) last season and was in attendance for their 74-68 win over then-No. 9 Purdue on Dec. 19 at nearby Bankers Life Fieldhouse.
"It meant so much to our players (for him to be at that game), those who played with him and those who got to know him through this experience," c…
Posta un commento
Continua a leggere

- gennaio 16, 2016
Date: 1/16/2016 Time: 02:00 P.M. EST
Xavier didn't dwell after Edmond Sumner was injured in its only loss of the season, and the results showed.  The seventh-ranked Musketeers are set to welcome their point guard back Saturday when they visit Marquette looking for a fourth straight victory.  Sumner, who averages 11 points and 3.1 assists, took a hard fall on a drive to the basket in the opening minutes of Xavier's 95-64 loss at Villanova on Dec. 31. After he was taken off the court on a stretcher, the Musketeers (15-1, 3-1 Big East) never found a rhythm as Villanova shot 63.2% and hit 13 3-pointers.
Coach Chris Mack went with a conventional look in the first game without Sumner as forward James Farr had 8 points and 10 rebounds in an 88-69 victory over then-No. 16 Butler on Jan. 2, and sophomore J. P. Macura has started the last 2 games, totaling 20 points in wins over St. John's and DePaul.
Macura had 13 points, 4 rebounds, 3 steals and 2 assists in Tuesday's 84-64 t…
Posta un commento
Continua a leggere

- gennaio 16, 2016
Cheatham Attacking Basket, Contributing Offensively  Freshman guard Haanif Cheatham has displayed the ability to consistently get to the rim and last Saturday’s outing against St. John’s was another perfect example.
The Fort Lauderdale, Florida, native finished with 15 points in 30' of action. He finished 4‐of‐8 from the floor, 7‐of‐8 from the free throw line and also chipped in 5 rebounds, 3 assists and a steal.  After reaching double figures just once in 4 outings, he has now netted 10‐or‐more in 6 of the team’s last 7 games (13.6 PPG during that time). Cheatham is fourth on the squad in scoring at 11.4 points per game and is shooting 52.4 percent (12th in BIG EAST) from the floor. He owns 65 made field goals on the year and each of them have either been a 3‐pointer or a basket at the rim.  Cheatham was named to the BIG EAST Honor Roll on Jan. 11 after averaging 15.5 points, 4.5 rebounds and 2.5 assists in a 2‐0 week and scoring a team‐high 16 points in a 65‐64 win at Providence.

- gennaio 16, 2016
#AndrewSmithStrong:  Butler stand-out Andrew Smith passed away Tuesday (Jan. 12) morning after a two-year battle with cancer. Smith was a member of Butler’s basketball teams from the 2009-10 through 2012-13 seasons. He was a member of both national championship game teams (2010, 2011) and an Academic All-American. He is one of three players in program history to record both 100 wins and 1,000 career points. A memorial service is planned for Sunday. Butler will wear a uniform patch in tribute to Andrew for the remainder of the season. At Saturday’s game, a video tribute and moment of silence are planned.  Saturday’s game is also the third annual Stay Positive game, which is an organization founded by cancer survivor Eric Day. Proceeds from several in-game fundraisers will benefit the Smith Family.
‘ROSE’ TO THE OCCASION:  Roosevelt Jones scored the final 10 points of the game for Butler in Saturday’s narrow defeat to Villanova. He finished the game with a team-high 20 points on 8-of-14…
Posta un commento
Continua a leggere

- gennaio 16, 2016
1) FRESH START With only 3 returnees from last season, St. John’s freshmen have had the opportunity to make immediate contributions and continue to gain experience with the Red Storm.  Federico Mussini, Yankuba Sima, Malik Ellison and Kassoum Yakwe each average at least 20 minutes per game and have contributed nearly 40% of the team’s scoring, rebound and assist totals.  Sima and Yakwe have already established themselves as premier shot blockers in the BIG EAST and the nation, averaging 3.1 and 2.3, respectively.  All four freshmen have started for the Red Storm this season with Mussini one of only two players on the team to start all 18 contests. He has played a league-high 600 minutes.
2) DOUBLE TEAM Four Red Storm players scored double-figures for the fourth time this season on Wednesday versus Georgetown.  Ron Mvouika led St. John’s in scoring for the second time in the past three games and for the third time this season finishing with 15 points. It was his ninth double-digit scori…
Posta un commento
Continua a leggere

SJU St. John’s faces its sixth nationally-ranked opponent of the season in No. 23 Butler. The Red Storm’s strength of schedule is top 40 in the nation. The last time the Red Storm knocked off a Top-25 team on the road was Jan. 5, 2013 at No. 14/15 Cincinnati (53-52).St. John’s is tied for seventh in the nation averaging 6.1 BPG. Freshman forward Kassoum Yakwe leads the BIG EAST in conference play averaging 2.6 rejections. Yakwe’s 6 blocks versus Marquette last Saturday tied freshman teammate Yankuba Sima and Golden Eagles forward Luke Fischer for the most by a BIG EAST player this season. With 9 new scholarship players, the Red Storm has started at least 2 freshmen in all 18 games this season. Freshman guard Federico Mussini has started all 18 games and ranks second in the BIG EAST playing 33.3 minutes per game. Mussini is one of 4 St. John’s freshmen to receive the starting nod this season (Sima, Ellison, Yakwe). St. John’s starting lineups in BIG EAST play have feature ve players fr…
Posta un commento
Continua a leggere

With heavy hearts, Butler will take on St. John's 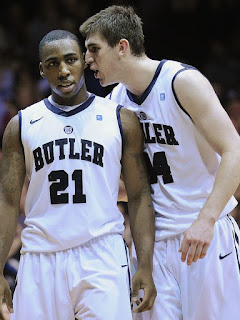 http://www.indystar.com/story/sports/college/butler/2016/01/15/heavy-hearts-butler-take-st-johns/78800878/?from=global&sessionKey=&autologin=
Scholarship Fund. His widow, Samantha, posted on Twitter:
“Andrew LOVED Butler. I am so honored and proud that this will be established in his name; it's a wonderful tribute.”
Players from Covenant Christian, where Smith played in high school, were to wear jerseys from his senior season in Friday’s game against Plainfield – including No. 33, which had not been worn since Smith graduated.
It has been the delicate task of Chris Holtmann, who did not coach Andrew Smith, to honor Smith’s memory while at the same time managing emotions of Butler players and preparing them for a Big East schedule. Players, who will wear “AS44” patches for the rest of the season, gathered after practice Wednesday to share and hear stories of the former Bulldog center.
The Butler coach has an ally in Curt Smith, father of Andrew. Holtmann said the father told …
Posta un commento
Continua a leggere
Altri post