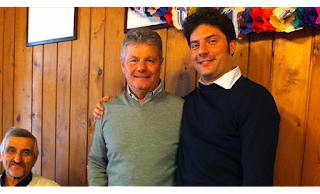 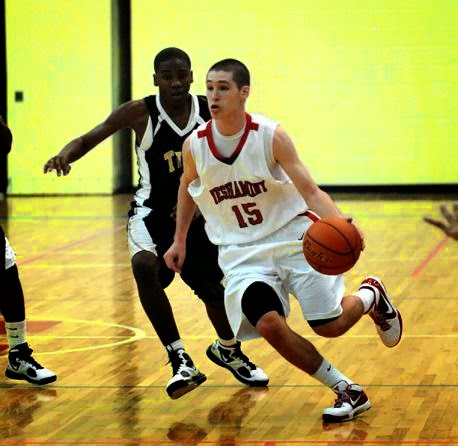 It doesn’t matter what time of day it is, or how long the sessions go. It never did. Ryan Arcidiacono is going to do his ladder drills, dribbling drills, jumping drills and then take about 500 shots. He’ll do it four days a week for about 90 minutes a day. He’ll do it with the sneaking suspicion that someone somewhere is working harder than he is.
No one tells him to drive himself like this. No one ever had to. Arcidiacono (pronounced Archie-dee-akono) always envisioned big things. To get there means work, grueling commitment and an ever-driving attitude to outwork everyone else. It’s what has placed the 6-foot-3, 180-pound Neshaminy High point guard among the top sophomores in the country.
He’s averaging 17.3 points, 4.9 assists and 6.3 rebounds a game for…
Posta un commento
Continua a leggere

The maturation of Ryan Arcidiacono

- febbraio 05, 2015
http://www.vuhoops.com/2014/10/23/7052685/the-maturation-of-ryan-arcidiacono
By Tyler Tynes  @TylerRickyTynes on Oct 23 2014, 7:00p
NEW YORK -- Four months ago, when Ryan Arcidiacono found out he was headed to Italy for training camp with the national team, he had no idea what he would learn in the weeks that would follow.
So, he spiked his hair. He packed his bags for Folgaria, Italy and headed across the Atlantic Ocean as a replacement for another Italian player. He was the only American-born athlete on the team. And he was expected to run it. But not in the way that he expected.
"I HAD TO FIGURE OUT HOW THE COACH WANTED ME TO PLAY WITH A SHORTER SHOT CLOCK AND BE AN ACTUAL POINT GUARD"  - RYAN ARCIDIACONO AT WEDNESDAY'S BIG EAST MEDIA DAY
The Villanova way, passing along the perimeter and running three to four guards at a time, wasn't going to work against professional athletes from different countries. So coach Luca Dalmonte switched up his playing style. He nurtur…
Posta un commento
Continua a leggere

- febbraio 05, 2015
In nine seasons as the head coach of the program he has been around since his youth, John Thompson III has made his mark not only on the Georgetown men's basketball program, but in the élite circles of college basketball. Thompson, who has been a collegiate head coach for 13 seasons, has compiled several coaching milestones:
• Since his arrival on the Hilltop, the Hoyas have reached the postseason in all nine seasons.  • Including an appearance in 2013, Georgetown has been selected to the NCAA Tournament in seven of the last nine seasons.  • In five of the team's seven NCAA Tournament appearances, the Blue & Gray have been seeded among the top three teams, earning three No. 2 seeds (2007, 2008, 2013) and two No. 3 seeds (2010, 2012).  • In the last seven seasons, Georgetown is one of only four schools nationally to have made at least one appearance in the Associated Press Top 25 in seven-straight years.  • In 2006-07, Thompson led the program to a 30-7 record as the Hoyas…
Posta un commento
Continua a leggere 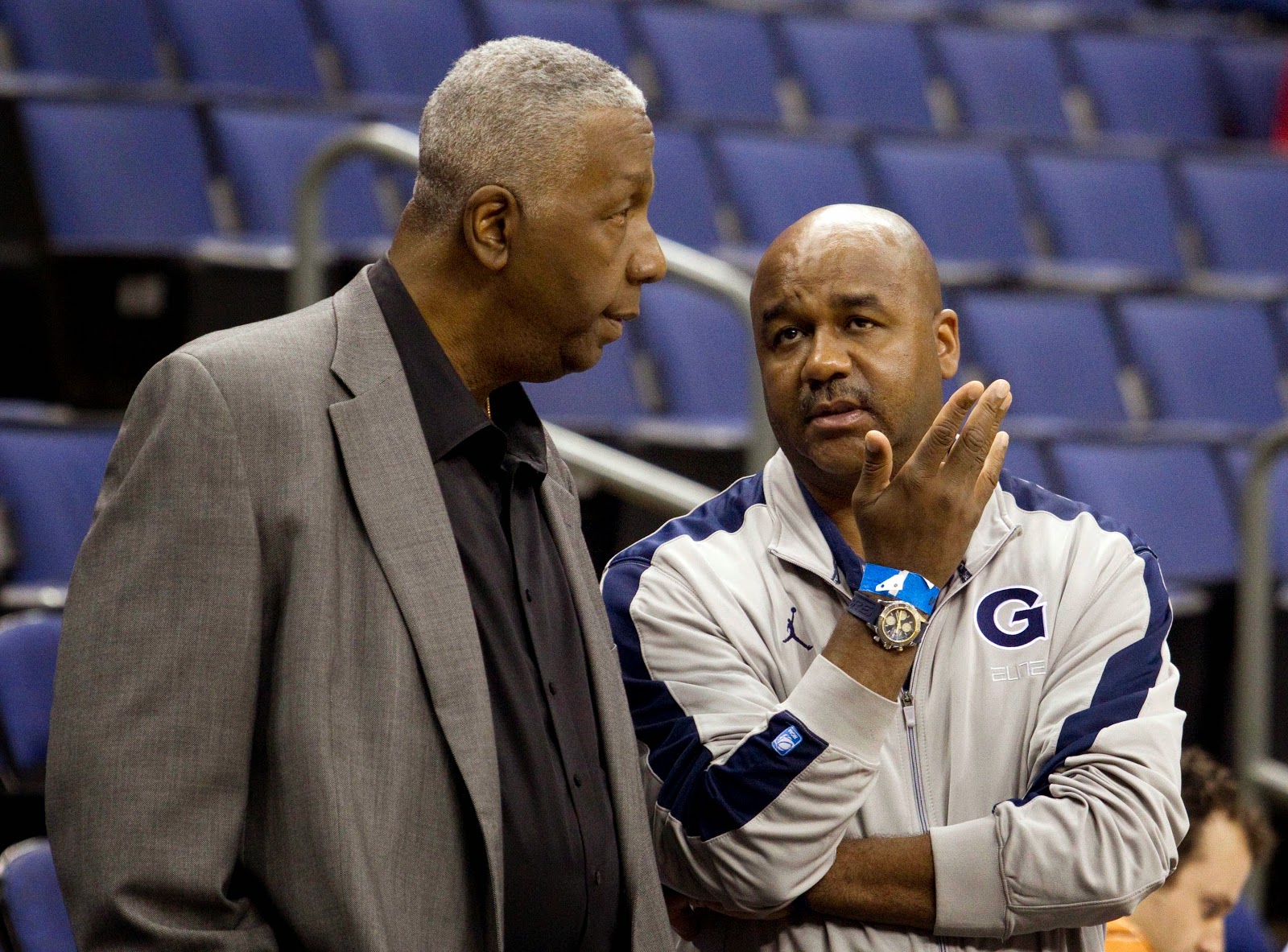 Head coach - 11th season
227-104 at Georgetown | 295-146 overall
In 10 seasons as the head coach of the program he has been around since his youth, John Thompson III has made his mark not only on the Georgetown men’s basketball program, but in the élite circles of college basketball. Thompson, who has been a collegiate head coach for 14 seasons, has compiled several coaching milestones:
• Since his arrival on the Hilltop, the Hoyas have reached the postseason in all 10 seasons. • Including an appearance in 2013, Georgetown has been selected to the NCAA Tournament in seven of the last 10 seasons. • In five of the team’s seven NCAA Tournament appearances, the Blue & Gray have been seeded among the top three teams, earning three No. 2 seeds (2007, 2008, 2013) and two No. 3 seeds (2010, 2012). • In 2006-07, Thompson led the program to a 30-7 record as the Hoyas won the BIG EAST Tournament Championship, the NCAA East Regional and advanced to the Final Four for the first time since 19…
Posta un commento
Continua a leggere

In a program long defined by achievement, Jay Wright has in his 13 seasons as head coach placed his own imprint of success on Villanova Basketball. Under his dynamic stewardship, which includes national and BIG EAST coaching awards, Villanova has re-established its place among the national élite.
After earning an at-large berth in the 2014 NCAA Tournament, Villanova has made nine such appearances in the last 10 seasons. The Wildcats earned the BIG EAST regular season championship in 2013-14 while establishing a new program for regular season victories en route to a 29-5 finish. Villanova was eliminated from the NCAA Tournament by Connecticut, the fifth time in the last 10 seasons it was defeated in the event by the eventual champion.
On Feb. 7, 2014, Wright recorded his 400th career victory with a triumph over Se…
Posta un commento
Continua a leggere 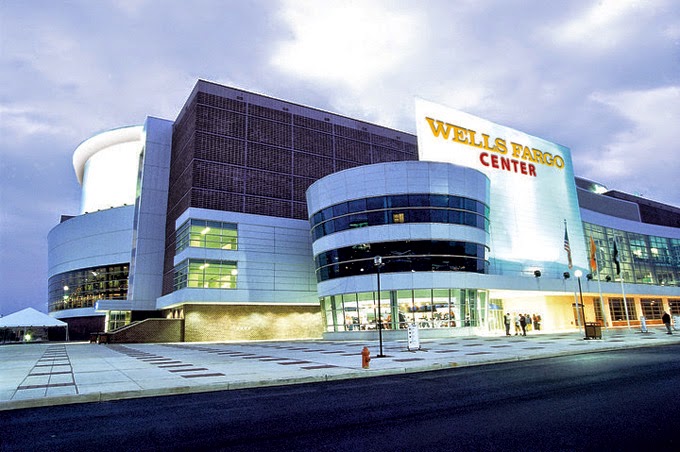 Villanova vs G'Town, 30 Years Ago

On this day in 1985, in one of the greatest upsets in college basketball history, the Villanova Wildcats beat the Georgetown Hoyas, 66-64, to win the NCAA Men’s Division I tournament. The victory was Villanova’s first-ever national championship.
Over 23,000 college basketball fans gathered at Rupp Arena in Lexington, Kentucky, for the match-up between the Hoyas, who took home the NCAA championship in 1984, and the Wildcats, who finished the ’85 regular season tied for third place in the Big East conference.  On their way to meeting the Hoyas, who were coached by John Thompson, the underdog Wildcats, coached by Rollie Massimino, beat No. 2-ranked Michigan, No. 5-ranked Memphis State and No. 7-ranked North Carolina in tournament play.
During the championship game on April 1, the Wildcats shot 79 percent from the field and nailed 22 of 28 shots, plus 22 of 27 free throws.  Wildcats forward Dwayne McCain, the leading …
Posta un commento
Continua a leggere

- febbraio 05, 2015
http://www.nj.com/rutgersbasketball/index.ssf/2013/02/villanovas_ryan_arcidiacono_pa.html
Villanova point guard Ryan Arcidiacono is part of a huge family, many of whom have played Division 1 sports across the northeast.
Brendan Prunty/The Star-Ledger By Brendan Prunty/The Star-Ledger
February 18, 2013 at 7:46 AM
Like any big family, it’s all about the food. Trays and trays of meatballs. Big pasta dishes. Bread, desserts, side dishes, the works. All of it homemade, of course — after all, these are the Philadelphia suburbs, where the days, events and celebrations were big deals. This is what Ryan Arcidiacono thinks about when you ask him about his family, because once he starts to go on and on about how many there are and what they all do, it’s easy to see why what’s on the table is the centerpiece of it all.
"My cousin starts for the Villanova lacrosse team as a freshman," Arcidiacono, of Neshaminy, Pa., said recently.
"My other girl cousin is going to UNC for lacrosse…
Posta un commento
Continua a leggere

- febbraio 05, 2015
January 11, 2013, 3:44 pm http://www.csnphilly.com/ncaa/arcidiacono-family-mildly-stunned-villanova-freshmans-rise
The kids in the basketball camp were running out of the Pavilion when coach Jay Wright stopped one of the seventh-graders in the middle of the court to tell him something. The seventh-graders father was there, too. Both of them eagerly leaned in to listen. Your parents bled blue and white, the Villanova basketball coach said. And so will you some day. The seventh-grader sheepishly smiled. His father did the same, not quite sure if Wright was being serious. It wasnt until he left the Pavilion, making the same walk to the parking lot he used to make as a student three decades earlier, that he began to think that maybe Wrights bold prediction was realistic. Maybe his son Ryan could play college basketball at Villanova. I remember it like it was yesterday, Joe Arcidiacono says. I remember thinking what a dream that would be. He pauses. His voice rises an octave when he contin…
Posta un commento
Continua a leggere
Altri post