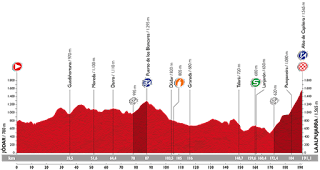 There’s barely a metre of flat road on this stage, which concludes with the first high-altitude summit. Once again, the finale is new to the race, although many of the riders will be familiar with the roads that run close to the Sierra Nevada resort, which hosts so many training camps. The finale on the Alto de Capileira lies on the southern flank of the Sierra Nevada. Reached via the water-producing centre of Lanjarón and the town of Órgiva in the Alpujarra mountains, the road to it rises for almost 20km at an average gradient of five per cent. The second half of the climb is steeper than the first and will see the field whittled down until just the contenders for the red jersey are left.

David López
It looks a pretty hard stage even though there aren’t many categorised climbs. It could be a good day for a breakaway but the favourites may have an eye on this one, too. There are a lot of finishes on small climbs this year …
Posta un commento
Continua a leggere
Altri post