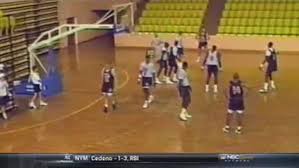 https://jackmccallum.net/2017/07/23/25-years-later-the-mystical-dream-team-scrimmage/
A recent piece on ESPN.com by Micah Adams reminded me that July 22 was the 25th anniversary of the famous Dream Team intrasquad scrimmage in Monte Carlo. I wrote about it in my 2012 book, Dream Team, and an excerpt from that chapter appeared in Sports Illustrated just before the book was published.
(You can buy the book here. http://tinyurl.com/yb3r7onx)
A month hasn’t gone by in the intervening five years without my getting a query about that scrimmage game, which has taken on a mystical quality for two reasons: First, a tape of it has never been shown in its entirety (yes, I have it; more on that later), and, second, because some of the players, Michael Jordan in particular, speak so fondly of that game. An excellent documentary on NBA TV, which first appeared in 2012 and has been repeated often since then—make sure you see it—showed a snippet of the game but only added to the confusion because it m…
Posta un commento
Continua a leggere
Altri post