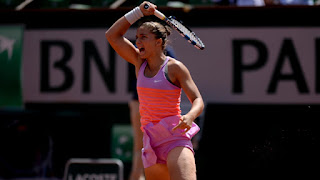 The Man behind the Legend 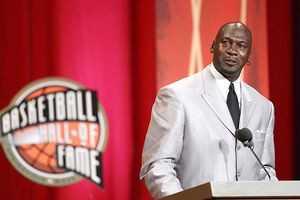 http://www.espn.com/chicago/columns/story?columnist=greenberg_jon&id=4468210
Saturday, September 12, 2009 By Jon Greenberg ESPNChicago.com
The greatest athlete of our time travels on private planes and in very fast, very expensive foreign cars. When he goes somewhere, it's on his schedule and it's always in style.
However he travels, Michael Jeffrey Jordan does not take the high road, as he proved in an oddly compelling speech Friday night.
Jordan's Basketball Hall of Fame induction speech in Springfield, Mass., was Jordan at his most honest, his most real. He cried, thanked his friends and family, rebuked his so-called enemies and proved that he is -- forever and ever -- the most competitive person alive.
In this sometimes funny and sharp-edged speech, the world's most ubiquitous and successful corporate pitchman proved he was still human. He wasn't selling Nike or Gatorade or batteries or hot dogs. He wasn't pretending he was a basketball executive.
After…
Posta un commento
Continua a leggere 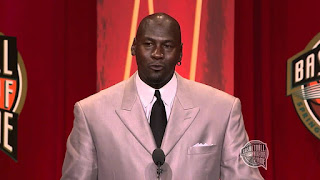 by Michael Jordan, 2009
Thank you. Thank you.
I told all my friends I was just gonna come up here and say ‘thank you’ and walk off. I can’t. There’s no way. I got too many people I gotta thank. In all the videos, you never just saw me; you saw Scottie Pippen. Every Championship I won. I’ve had a lot of questions over the last four weeks, and everybody’s saying well ‘why’d you pick David Thompson?’ I know why, and David knows why, and maybe you guys don’t know why, but as I grew up in North Carolina, I was 11 years old in 1974 I think when you guys won the championship. And uh, I was an anti-Carolina guy – I hated UNC, and here I ended up at UNC. But I was in love with David Thompson. Not just for the game of basketball, but in terms of what he represented. You know, we all – as Vivienne said – we go through our trials and tribulations. And, he did. And I was inspired by him. And when I called him and asked him to uh, stand up for me, I know …
Posta un commento
Continua a leggere
Altri post