I due decenni di Abdul-Jabbar 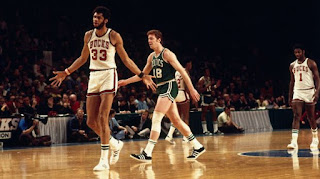 World champion Michal Kwiatkowski is a proven one-day racer as the rainbow bands show, but the extent of his full talent is yet to be seen.

Kwiatkowski finished 11th at the Tour de France on his debut in 2013 and while the yellow jersey is not a consideration for him this season, the diverse rider has shown he has the potential to go for it in the future.

The 2014 Polish national time trial champion is set to, along with Tony Martin, be afforded his own opportunities at the Tour in a team that may otherwise prioritise Mark Cavendish. That shouldn’t be a problem for Kwiatkowski, who demonstrated his ability as a tactician at the Worlds last year, where he exhausted national team-mates early in the race before making a strong move within the final 10km.

Some riders might be given a year’s grace when they move to a new team, but not triple maillot vert champion
Peter Sagan. Sagan signed with Tinkoff-Saxo for a reported €4 million and with that came an expectation of results, firstly at the Spring Classics, where the Slovak prodigy was only there or thereabouts.
Outspoken team owner Oleg Tinkov wasn’t impressed, not seeming to take into consideration that riders can sometimes take a season to properly gel in a different squad.
Sagan apparently got the message in time for the Tour of California in May, which, following two stage victories, he won on a time bonus. The 25-year-old has been unbeatable in the green jersey competition at the Tour that he has won three times consecutively but cannot be described as a shoo-in this season.

Alexander Kristoff has been the stand-out sprinter of a season in which he has so far amassed an impressive 16 victories. The versatile fastman may not be able to beat Marcel Kittel or Mark Cavendish in a 200m drag-race but his ability to climb should deliver at least one stage win at the Tour.
Kristoff had a breakthrough at the race last year, winning two stages and finishing second in the points classification behind Peter Sagan, in what was only his second race participation.
“I have learned I have this strong attack; I don’t always need to sit on the wheels,” he observed earlier this year.
The 27-year-old has continued that success in 2015. He was celebrated at the Spring Classics after winning the Tour of Flanders as well as Scheldeprijs, the latter in the absence of his major rivals, and consistently claimed stage vi…
Posta un commento
Continua a leggere

- giugno 26, 2015
FACT FILE Age: 30
Height: 175cm
Weight: 70kg
WT ranking: NA
Wins in 2015: 13
Career wins: 133
Days racing in 2015: 39
Tour stage wins: 25
KM raced in 2014: 7,243
Form rating: ++++
Mark Cavendish will go to the Tour de France with a point to prove this season. The 30-year-old is a legend of the race as his 25 career stages — and the green jersey at the 2011 edition — attests. However, Marcel Kittel has since 2013 superseded the ‘Manx Missile’ as the man to beat, and Cavendish is determined to show he is not bound for retirement yet.
Cavendish is out of contract with Etixx-Quick Step after this season and his performance at the Tour, and ability to re-establish No.1 status, may impact on contract value, thus providing further motivation. Added to that incentive is his early exit from the race last year following a highspeed crash on day one in Harrogate.
The mercurial fastman has been consistent this season despite suffering a stomach virus after a trip to South Africa with his good friend and form…
Posta un commento
Continua a leggere 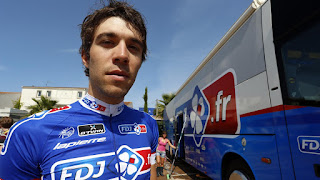 Thibaut Pinot has stayed out of the limelight for much of this year. What we have seen, though, has been promising. The young Frenchman has put in good showings at Tirreno-Adriatico (where he finished fourth, ahead of Alberto Contador and Vincenzo Nibali), the Tour of the Basque Country (10th), and the Tour of Romandy, where an excellent win on the penultimate stage saw him claim fourth place overall, and the Tour de Suisse.
His Tour performances so far are promising too, finishing 10th on his debut in 2012 followed by a spot on the podium last year. Pinot’s first shot at La Grand Boucle showcased some serious talent when he stayed with Chris Froome as the Sky rider moved away from Bradley Wiggins on La Toussuire. Pinot then outsprinted Froome to take second place on the stage.
It may still be too ea…
Posta un commento
Continua a leggere 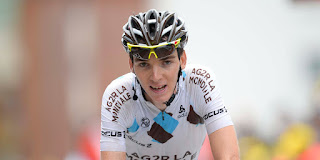 FACT FILE Age: 24
Height: 1.84m
Weight: 65kg
WorldTour ranking: 30
Wins in 2015: 1
Career wins: 3
Days racing in 2015: 43
Best Tour GC finish: Sixth (2014)
KM raced in 2015: 6,553
Form rating: +++
The man who has spent the last few years juggling his burgeoning cycling career with studying for a diploma at the Grenoble School of Management had not, until recently, claimed a single WorldTour win. Ag2r, however, saw enough in 2014’s stirring sixth place at the Tour (and a string of other strong results last season — fourth in the Tour of Catalunya, fifth in the Critérium du Dauphiné, 10th at Liège-Bastogne-Liège) to sign up the 24-year-old until 2018.
At this year’s Dauphiné, he showed why he was worth that investment, with an expertly controlled descent off the treacherous Col d’Allos to take victory on stage five. Even more significant is the fact that the win took place at Pra Loup, on a stage that is virtually a carbon copy of what faces the riders on stage 17 of this year’s Tour.
Having pul…
Posta un commento
Continua a leggere

- giugno 26, 2015
FACT FILE Age: 25
Height: 1.67m
Weight: 59kg
WorldTour ranking: 15
Wins in 2015: 2
Career wins: 21
Days racing in 2015: 36
Best Tour GC finish:
Second (2013)
KM raced in 2015: 5,254
Form rating: +++
The sight of Nairo Quintana riding away from his rivals on Monte Terminillo in driving snow at Tirreno-Adriatico dispelled any doubts over the Colombian’s physical or mental toughness. The stage win sealed the overall impressively, ahead of a shell-shocked Alberto Contador.
A consummate climber, Quintana returns to the Tour this year having been sent to the Giro in 2014 — which he duly won. He may have taken the Tour by storm in 2013, but his Movistar team made the dreadful decision to back Alejandro Valverde at the race in 2014.
Quintana returned to the Classics this year, as he had before finishing second in the Tour in 2013. His experience at Flèche Wallonne in particular should help him on this year’s third stage, which will finish on the Mur de Huy. Alongside a solid fourth at the Tour of the Basq…
Posta un commento
Continua a leggere

- giugno 26, 2015
FACT FILEAge: 32
Height: 1.76m
Weight: 62kg
WorldTour ranking: 2
Wins in 2015: 4
Career wins: 61
Days racing in 2015: 44
Best Tour GC finish: Winner
(2007, 2009)
Km raced in 2015: 7,291
Form rating: ++++
From one angle, two-time Tour champion Alberto Contador’s season is coming to the boil at the perfect time. After a quiet start to 2015, he brushed off an early crash at the Giro d’Italia to throttle the life out of the race in its final week, and his single-minded drive up the Mortirolo on stage 16 was something to behold. His main Tour challengers, though, were elsewhere. While he left a Quintana in his wake in Italy, it was Dayer rather than older brother Nairo; and it was the latter who took the honours at Tirreno-Adriatico in March, when the Spaniard could only manage fifth. Chris Froome beat him at the Ruta del Sol, and Richie Porte and Alejandro Valverde saw him off in Catalonia.
Reason enough to worry? Maybe not. Contador remains a formidable rider when he hits the front — briefly losing …
Posta un commento
Continua a leggere

- giugno 26, 2015
FACT FILE
Age: 30
Height: 1.81m
Weight: 65kg
WorldTour ranking: 105
Wins in 2015: 0
Career wins: 30
Days racing in 2015: 35
Best Tour GC finish:
Winner (2014)
Km raced in 2015: 5,641
Form rating: ++
Last year’s Tour victory was a surprise to those who saw Vincenzo Nibali as consistent but unspectacular. One of just six riders to have won all three Grand Tours (after adding the Giro in 2013 to his 2010 Vuelta triumph) there should be little doubting the Italian’s class. He has gone under the radar again this season, with his best result a forgettable 10th at the Tour of Romandy, behind Chris Froome, Thibaut Pinot, Nairo Quintana and Romain Bardet.

At Tirreno-Adriatico he was 16th overall, again failing to mount a challenge to his Tour rivals. It was, however, a similar story in the build-up to last year’s Tour when he went on to spend just two days without the yellow jersey on his shoulders. He seized control of the race before Froome hit the deck on stage five and Alberto Contador on stage 10. Th…
Posta un commento
Continua a leggere

- giugno 26, 2015
FACT FILE Age: 30 Height: 1.86m Weight: 69kg WorldTour ranking: 16 Wins in 2015: 5 Career wins: 26 Days racing in 2015: 27 Best Tour GC finish: 1st KM raced in 2015: 4,225 Form rating: ++++
Chris Froome had kept a comparatively low profile in the lead-up to the Tour de France this season, until his Critérium du Dauphiné victory last week reaffirmed his Grand Tour ambitions.
Rivals have noted Froome’s less auspicious build-up in terms of his results this season compared to those in the run to his 2013 yellow jersey victory. The 30-year-old had 3 wins to his name, four if you include the points classification at the Ruta del Sol, prior to the Dauphiné, in contrast to 8 in 2013, and he has raced less.
Nevertheless, Froome is the major favourite for the Tour and will have a devoted Team Sky, who have been on song, at his disposal. The Kenyan-born Brit has been unequivocally focused on the Tour since the off-season where he trained for a period with chief pilot Richie Porte in Australia.
As long ag…
Posta un commento
Continua a leggere
Altri post