The reality for Utah is that they have to take into consideration which players will take to living and playing here, as Salt Lake City's low-key community just isn't for every player. Dekker is a small town guy and fits in well …
Posta un commento
Continua a leggere

Center prospect with the size and skill set to make a strong impact at both ends of the floor in the NBA ... Hard worker, smart kid, with strength of character ... Shows desire and a competitive nature ... Possesses a great feel for the game ... Offensive game oozes potential with a text book shooting form, great touch and ability to hit outside and mid range jumpers effortlessly and consistently ... Has even implemented a steadily improving hook shot into his repertoire ... His length and strong body gives him excellent ability to rebound and hold position in the post... Tremendous rebounder on a per 40 minute basis, with big hands, good box out fundamentals, post positioning and energy ... Has worked hard on his body and ha…
Posta un commento
Continua a leggere 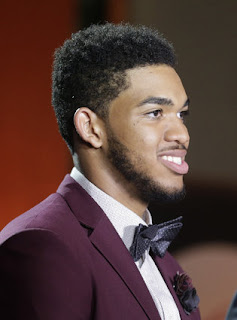 Karl-Anthony Towns (born November 15, 1995) is a Dominican-American basketball player who played his senior season for St. Joseph High School in Metuchen, New Jersey during the 2013–14 season and college basketball the University of Kentucky. He was named to the Dominican Republic national basketball team Olympic squad as a 16-year-old.

- Early years Towns was born in Piscataway, New Jersey to an African American father Karl-Anthony Towns, Sr. and a Dominican mother Jacqueline Cruz.  He attended Lake Nelson Seventh-Day Adventist School, he then went to Theodore Schor Middle School after transferring in from Our Lady of Fatima School in 2009. Towns’s father played basketball for Monmouth University and coached basketball at Piscataway Technical High School, where the precocious Towns practiced with the junior varsity team as a fifth grader.
- High school career As a freshman at St. Joseph High School, Towns led the basketball team to a state championship in 2012, earning himself the top …
Posta un commento
Continua a leggere

1  KARL-ANTHONY TOWNS C Kentucky - Minnesota Timberwolves  We’ve held out as long as we could with Jahlil Okafor as the top overall pick, and there are still scouts who insist Minnesota would make a mistake to pass on his polished, deft offensive game. But Towns’ athleticism and potential makes him worthy of the No. 1 spot, too, and either way, the Timberwolves figure to have an impressive young big man to go along with Gorgui Dieng.

2  JAHLIL OKAFOR C Duke - Los Angeles Lakers  The Lakers will consider Kristaps Porzingis and D’Angelo Russell with the No. 2 pick, but it is unlikely that they could pass on the consensus top-two pick. Okafor has a smooth interior game that should help bolster the Lakers’ rebuilding quickly.
Okafor wants to set the NBA back 20 years 3  KRISTAPS PORZINGIS PF  Sevilla - Philadelphia 76ers  We put Porzingis into this spot at the beginning of the month, and while D'Angel…
Posta un commento
Continua a leggere

2015 NBA Draft: the best team fits for the top prospects

- giugno 25, 2015
By Matt Moore | NBA writer June 24, 2015 12:41 pm ET
Karl-Anthony Towns: #1 MINNESOTA / #2 LAL  - NO #3 Phila / NO #4 NYK The Big KAT is going to end up with the Timberwolves most likely, and that's not a bad thing. The Wolves are a bit stocked down low, but Towns will clear out room for himself immediately. He'll also be paired with Andrew Wiggins, who can share the star-player burden, and there's also Ricky Rubio to find him for dunks and get him the ball.
The Lakers, though, would be perfect for Towns. An organization with a rich history of Hall-of-Fame big men, Towns would get to play next to Julius Randle, who would complement his skills perfectly, and learn from Kobe Bryant about what it takes to win. Towns would never worry about the team going into the luxury tax, or making moves to surround him with talent. Byron Scott would love him, and at the very least he'd get the ball all the time under Scott.
The Sixers would be a terrible fit for him, considering both…
Posta un commento
Continua a leggere

- giugno 25, 2015
WILLIE CAULEY-STEIN, C - KENTUCKY / 7 FEET / Junior The backbone of the nation’s top-rated defense, Cauley-Stein can bang with bigs down low or step out and defend guards. Though limited offensively, he is efficient (58.0% from the field) and rarely forces shots.
R.J. HUNTER, SG - GEORGIA STATE / 6' 6" / Junior From Damian Lillard to Elfrid Payton, top mid-major talent has had a nice NBA run. That will continue with Hunter, a relentless scorer (20.1 PPG) who just needs to polish his three-point shot.
BOBBY PORTIS, PF - ARKANSAS / 6' 11" / Sophomore While playing comparable minutes to last season, Portis has significantly improved his scoring (17.7 points per game, up from 12.3) and rebounding (8.8, up from 6.8) and is connecting on 44.4% of his three-pointers.
JERIAN GRANT, PG - NOTRE DAME / 6' 5" / Senior In December 2013, Grant, then the Irish’s leading scorer, was suspended for the rest of the season for academic reasons. Reinstated this season, he reemerged …
Posta un commento
Continua a leggere

OHIO STATE coach Thad Matta knew D’Angelo Russell could play. A lanky, 6' 5" guard, Russell was a cornerstone for back-to-back national tournament champion Montverde (Fla.) Academy; a McDonald’s All-American; and a willing passer with extrasensory court vision, yet someone who could score when necessary. Where he’d play for the Buckeyes would require some thought. “In D’Angelo, I saw a guard,” says Matta. “He wasn’t a true point, but he had such an understanding of the game. You just knew it would sort itself out.” Has it ever.
In four months Russell, 19, has evolved from a highly touted prospect without a defined position—ranked No. 18 by Rivals.com last May—to the nation’s best freshman point guard and one who has the tools to star at that spot in the pros. If you asked NBA general managers about D’Angelo in November, they might have thought you were…
Posta un commento
Continua a leggere
Altri post