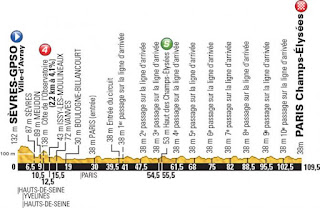 STAGE FACT
The Tour used to do a dead turn at the top of the Champs-Elysées but moved to circling the Arc de Triomphe in celebration of the Tour’s 100th edition in 2013.


This is the annual finale into central Paris, a procession followed by 8 high-speed laps up and down the cobbles of the Champs Élysées. Countless chancers will briefly entertain the idea of outfoxing the sprinters one last time. The last time that actually happened was 2005, when Alexandre Vinokourov gave the bunch the slip.
Look out for…
The yellow jersey riding alongside the race director’s car drinking champagne; the smallest rider in the race riding the biggest guy’s bike and viceversa. The early miles of the final stage always come with a ‘last day of term’ feel.

Does this stage matter?
Formulaic it may be, but the Tour de France isn’t over until you’ve crossed the finish line. Accidents can happen, and no one is officially bound by the gentleman’s truce betwe…
Posta un commento
Continua a leggere
Altri post