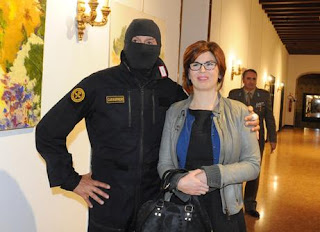 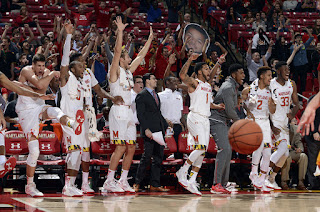 As a freshman, Melo Trimble led the Terrapins in minutes (33.5 per game) and scoring (16.2 points). He was also one of their worst points-per-possession defenders. Essentially, the 6'3" playmaker was nonstop — on both ends of the court. “Coach [Mark] Turgeon told me he really couldn’t take me out because I scored a lot,” Trimble says, “but my defense was terrible.”
Maryland should suffer fewer defensive deficiencies this winter. A team that led the Big Ten in field goal percentage D (39.5% shooting allowed) is bigger with the additions of 6' 9" junior forward Robert Carter Jr., a transfer from Georgia Tech, and 6' 11" freshman Diamond Stone. And with that extra depth behind him, the Terps’ most valuable player can push his defensive aggression. “[Trimble] will be allowed to foul,” Turgeon said. “Last year he’d get a foul, and it would be, ‘I don’t want to even s…
Posta un commento
Continua a leggere 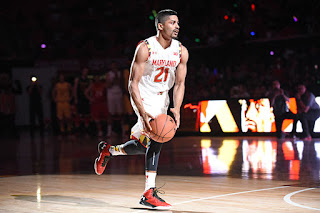 http://www.diamondbackonline.com/sports/maryland-guard-varun-ram-s-impact-extends-beyond-the-basketball/article_cb5b49c6-7ddc-11e5-bfd5-f7fe1672619d.html
Posted: Wednesday, October 28, 2015 9:29 pm
Varun Ram
Guard Varun Ram runs for a lay up during introductions when the Terps hosted Maryland Madness on Oct. 17, 2015.
Neither of Varun Ram’s parents watched the Terrapins men’s basketball team’s first NCAA tournament game this past March.
His mom was flying home from visiting relatives in Chennai, India. She landed at Dulles International Airport to a call from a Washington Post reporter.
His dad was teaching a night class in Germantown. Upon turning on his phone after the lesson, he got a text message saying Ram was trending on Twitter. Another text read, “Your son saved Maryland.”
Shaun Jayachandran, a former coach who taught basketball with Ram in India for two summers, though, was watching the waning moments of the Terps’ match with Valparaiso. Sitting in his living room, Jayachandr…
Posta un commento
Continua a leggere

BLUE RIBBON ANALYSIS: BACKCOURT A  BENCH/DEPTH A- FRONTCOURT A-  INTANGIBLES B+

BLUE RIBBON ANALYSIS: BACKCOURT B-  FRONTCOURT B+  BENCH/DEPTH B-  INTANGIBLES B

The formula behind San Diego State’s success under coach Steve Fisher often looks something like this: Long, athletic players everywhere on the floor, suffocating opponents on defense and creating offense behind a savvy, quick point guard who penetrates gaps and create shots for others.
But while the Azt…
Posta un commento
Continua a leggere
Altri post