GODFATHER OF THE GIRO 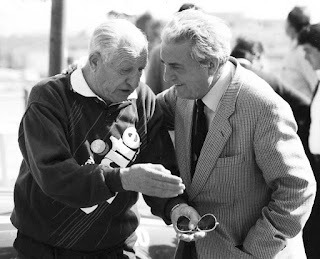 For over 40 years, from mid-century to the early 90s, the visionary Giro d’Italia organiser Vincenzo Torriani relentlessly pushed the boundaries, taking the race into new territory. Procycling looks at his legacy

Thirty years ago, at Italian races, you could still come across two men who had coloured much of post-war cycling history in ‘the Boot’. Gino Bartali was a fixture at the big races like Milan-San Remo, the Giro d’Italia and the Tour of Lombardy. He never really seemed to be doing much, to the extent that I pondered what his role was. Then one day I figured it out: Bartali’s job was to be Bartali. He was invited to the race to maintain a link back to the glory days of his jousts with Fausto Coppi and Fiorenzo Magni. He didn’t have to say or do very much, but his presence alone would remind Italian cyclists, media and fans of their heritage, and emphasise why whichever race it was still mattered. At the Tour de Fr…
Posta un commento
Continua a leggere
Altri post