6-4, Senior, Chaminade College Prep (St. Louis, Mo.) College: Florida Beal combines Ray Allen-like accuracy with a strong upper body, which allows him to be virtually unguardable. He went for 40 points in a 76-58 nationally televised win over McCluer North in February, and averaged 32 points, six rebounds, three assists and three steals per game this season. He was also named the Gatorade National Boys Basketball Player of the Year, after winning Gatorade Player of the Year in Missouri for the second consecutive year.
Brad Beal SG, Chaminade College Prep (St. Louis, Mo.), 2011 Deadly from deep with a strong upper body to fi nish in the lane, Beal’s game is reminiscent of Eric Gordon. He led USA Basketball’s U17 team in scoring during its gold medal run at the FIBA U17 World Championship, averaging 18.3 points for the tournament and dropping 19 points and fi ve triples in the gold medal game win over Poland. Committed to Florida.
Posta un commento
Continua a leggere

THE ONE AND ONLY CP3 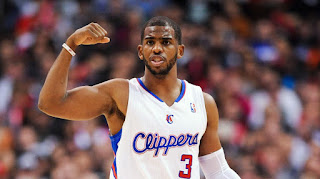 So many people want to speak on behalf of Chris Paul these days, that when the idea was hatched to put him on the cover of Dime for the third time since he burst onto the NBA scene in 2005, we decided to let CP3 tell his own story. After his Hornets started the season 4-0, the best point guard in the world penned this story…
WORDS. CHRIS PAUL, Dime, Dcember 2010/January 2011

What up, world! Here I write from “The Big Easy.” That’s right: New Orleans. I’ve been back for a while now, getting better each day to make this season one of our best. Dime has given me an amazing opportunity to write my own cover story. Can you believe it? Well, let me get to it before they take the offer back.
All summer long, I thought about how I was injured last year and couldn’t help my team on the court. Being hurt, missing the playoffs, not being able to play, it was one of the most difficult experiences of my career. I don’t want to go through that ever again. Thinking about that pushed me through my tra…
Posta un commento
Continua a leggere 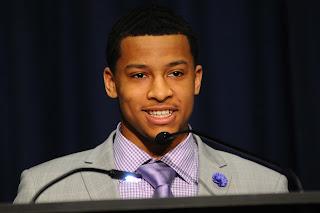 THE MERE MENTION OF MICHIGAN AND OHIO STATE IN THE SAME SENTENCE USUALLY AWAKENS THE BEAST THAT IS THEIR HEATED GRIDIRON RIVALRY. BUT FOOTBALL WON’T BE THE ONLY GAME IN TOWN THIS YEAR WHEN THE WOLVERINES AND BUCKEYES SQUARE OFF DURING BIG TEN PLAY. YOU CAN THANK TREY BURKE AND HIS LONGTIME FRIEND JARED SULLINGER FOR THAT ONE.

PLENTY OF WIDE-EYED, over-confident recruits are swallowed up and ruthlessly spit out by lofty goals and higher expectations. Maybe it’s the pressure. Maybe it’s the attention. Or maybe it’s just a matter of mental moxie. Whatever it is, no one who knows Trey Burke is worried. He’s calm, well-mannered and disciplined. Humble with confidence protruding. A self-aware optimist.
There’s a good chance that you don’t know Burke, and there’s an even better chance that you would scoff at his goal of 17 points and 10 assists per game for his upcoming freshman season at the University of Michigan in Ann Arbor.…
Posta un commento
Continua a leggere 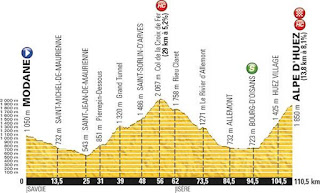 STAGE FACT
A plaque on each of Alpe d’Huez’s hairpins counts down the number of bends to the top and commemorates the various stage winners on the climb.

Do you remember the stage in 2011 when Alberto Contador attacked almost from the gun, the race blew to bits on the first climb and Pierre Rolland broke away to win? Well, this stage is identical — a lively blast of 110 km that does away with any preamble and smacks the bunch up with a triple whammy of Alpine icons. Same again then please
Maybe, maybe not. With less than two weeks to go before the Tour’s start it looked like the Col du Galibier — the highest climb of the race — would be taken off the parcours following a landslide this April. If the stage is rerouted it’s likely to go over the Col de la Croix de Fer before the ascent from Bourg d’Oisans up the infamous 21 hairpins of Alpe d’Huez, arena of some of the Tour’s most famous moments.