- ottobre 07, 2015
Wednesday, Oct 7th 2015
Football legend Uli Hoeness, boss of superclub Bayern Munich, could face jail as he stands trial accused of tax evasion after stashing millions in a Swiss bank accountHoeness could face mammoth fine in a case which has riveted GermanyGermany has cracked down hard on revenue cheats in recent yearsHoeness is president of Germany's richest and most successful clubHe turned himself into the taxman a year ago hoping for leniency
By Allan Hall for MailOnline

Hoeness could face jail as well as a mammoth fine on tax evasion charges in a case that has riveted the nation.

Germany has cracked down hard on revenue cheats in recent years, many of them caught through bank whistleblowers who sold stolen bank compute…
Posta un commento
Continua a leggere

Uli Hoeness withheld millions from the state, fueling debate in Germany. The case played a major role in Germany's federal elections in 2013. Now he has been sentenced to three years and six months in jail.


Bayern Munich boss Uli Hoeness admitted his own wrongdoing in January 2013 - by filing an amended tax return that showed he avoided paying taxes by means of a Swiss bank account. On Thursday, his trial came to an end. Hoeness turning himself in did not prevent him from receiving a prison sentence , the judge said, because not all information was put on the table from the beginning. In total, Hoeness evaded 28.4 million euros ($39 million) in taxes, according to the court.

The case had drawn so much attention because Hoeness played on the German national team and was president of Germany's most successful soccer club - making him one of the most powerful sports figures in the country. The 61-year-old has had a…
Posta un commento
Continua a leggere

Uli Hoeness reached the very pinnacle of German football, but now he faces spending the next three and half years in jail.

Uli Hoeness has decided not to appeal against his three and a half year prison sentence for tax evasion and has offered his definitive resignation as president of Bayern Munich.

Initially, after the sentence delivered yesterday by Judge Rupert Heindl, the 64-year-old defence team had claimed the right to appeal. However Hoeness said today that, after discussions with his family, he felt the only responsible action was to accept to sentence and also to step down from his positions with the world, European and German champions.

At the heart of the sentence issue was the size of the tax debt run up by Hoeness through his stock market activity via a Swiss bank account. Heindl indicated he estimat…
Posta un commento
Continua a leggere

To be a man...: Has life played its last cruel card on Odartey Lamptey?

The former Ghana international has suffered one misfortune after another in his 38-year-old life, and Goal wonders if his latest could prove his worst yet

Mention a man toughened by abrasive adversity and the harsh realities of life, and Nii Odartey Lamptey readily comes to mind.

From childhood through his existence as a man and a footballer, Odartey has always received little change from the people he has trusted and expected most from. Disappointments and exploitation by those dearest to his heart has largely been the story of his life.

As a child, Lamptey was raised amidst turbulence. His father, a hopeless alcoholic, regularly beat him, even burning young Lamptey with red-hot cigarette butts whenever he felt like it. Consequently, Lamptey would often spend nights away from home. When aged just eight, his parents spli…
Posta un commento
Continua a leggere 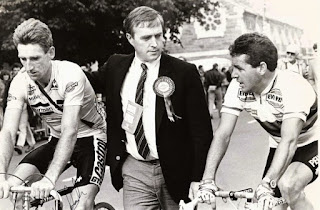 Pat McQuaid with Sean Kelly and Stephen Roche at the Nissan Classic; a race the former UCI president was instrumental in developing and running from the mid 1980s to the early 1990s (Photo: John Pierce – PhotoSport International)
By Brian Canty
October 7th, 2015
One of the two men responsible for bringing the Nissan International Classic to Ireland in the mid-1980s has said the event changed the face of Irish cycling forever.
Pat McQuaid, along with fellow race director Alan Rushton, succeeded in bringing 18 teams to Ireland for the stage race event which saw many of the world’s top riders take part.
Among those on the start line for that first stage from Trinity College, Dublin, to Wexford were Sean Kelly and Stephen Roche as well as former World champion Hennie Kuiper and one of Kelly’s big rivals in the classics and the sprints, Dutchman Adri van der Poel.
One man who was gutted to mis…
Posta un commento
Continua a leggere
Altri post