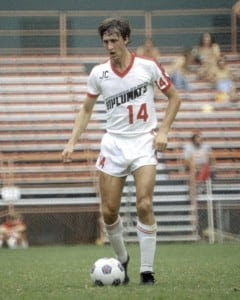 We, the Dutch, don’t usually revere our sport stars. But last Thursday, when the news about Johan Cruyff’s death broke, the country was in collective shock, in complete disbelief. Cruyff was immortal, we thought, despite his recent lung cancer diagnosis. Days of press coverage and tributes since then revealed not only deep adoration for his sheer genius but also strong nostalgia for our own past. Memories of Cruyff led to flashbacks of our own youth, since Cruyff had always been there, on or off the field, as a key figure.

Surely, he was a world-class soccer player and coach, who modernized the game of football. More importantly, he helped shape our national identity over the last 50 years, perhaps even more so than the House of Oranje, whose kings and que…
Posta un commento
Continua a leggere

A New Direction Going into the 1966-67 season the Sixers had made a big coaching change by firing franchise leading scorer Dolph Schayes and replacing him with Alex Hannum. Schayes was a 12 time All-Star while playing for the Syracuse Nationals, but had lost to Boston in the playoffs in both 1965 and 1966 despite a franchise record 55 wins in the latter. Hannum on the other hand was the last coach to beat the Celtics in the playoffs as the coach of the 1958 St. Louis Hawks. The problem was that since ’58 the Celtics had rattled off 8 consecutive championships under Red Auerbach and Bill Russell.
The Sixers were in just their 4th year in Philadelphia since moving from Syracuse and had just marginal success. Wilt Chamberlain had made the move with the Philadelphia Warriors to San Fransisco in 1962-63 but made his way back home to Philly mid-way through the 1964-65 season. Wilt joined former All-Stars Hal Gree…
Posta un commento
Continua a leggere
Altri post