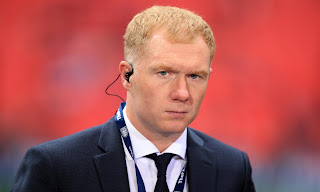 https://www.theguardian.com/football/2019/jan/23/paul-scholes-class-of-92-manchester-united-ole-gunnar-solskjaer
Jamie Jackson - The Guardian @JamieJackson
Wed 23 Jan 2019 22.30
Paul Scholes believes it is “strange” that only Nicky Butt of the Class of 92 works at Manchester United, the former midfielder stating that Sir Alex Ferguson’s wish was for them all to have roles.
Scholes was referring to himself, Ryan Giggs, David Beckham and Gary and Phil Neville together with Butt, who is the head of academy at United. Scholes went as far as to say that he had been left feeling unwelcome at United. The six own 60% of Salford City, following the announcement on Wednesday that Beckham has bought a 10% stake.
Although Giggs was United’s interim manager and then Louis van Gaal’s No 2, and Scholes has coached there, the 44-year-old pointed to the way in which Ferguson’s vision has not been fulfilled. The Scot retired as manager in May 2013 and Scholes stopped playing at the same time.
“It is a li…
Posta un commento
Continua a leggere
Altri post