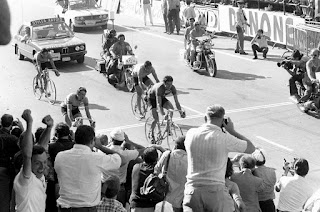 The race for the rainbow jersey is ripe for scandal and intrigue. A look at ten of the juiciest incidents from the World Championships’ history

The 2016 UCI World Championships in Doha, Qatar, have not passed without controversy, whether it be due to the searing heat, course safety or indeed concerns around human rights in the host country.
However this year is not the first time that scandal has hit the headlines in the fight for the rainbow jersey.

1963 – Ronse A Belgian won, but it wasn’t the man everyone expected. Pre-race favourite Rik Van Looy was pipped by compatriot Benoni Beheyt, who grabbed hold of his leader’s jersey in a dirty sprint and hoisted himself to victory. It became known as the ‘Treason of Renaix.’ Van Looy didn’t speak to him for years and the new champion struggled to get criterium contracts, retiring ignominiously five years later, at the age of 28.
1965 –…
Posta un commento
Continua a leggere
Altri post