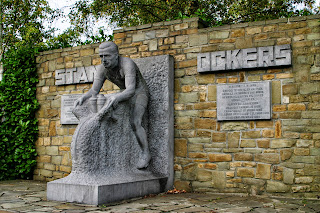 txt by: Christian Giordano
Forever too young, poor Stan – That's what his family used to call him.
Constant (Stan) Ockers was born on February 3rd, 1920 in Borgerhout, a suburb of Antwerp, Belgium. A cycling heaven, if there is such a thing, except for him – Since his childhood dream was to enlist in the Belgian Navy. In order to achieve this, he left school early, however he was too young to join up. As a result of this, he had to start his apprenticeship as a ship-painter on the docks.

However, his new and unexpected career did not last too long because his older brother Jos bought him a bike and Stan discovered that he was a natural road rider. At that time, he was playing football, which is not a such good combination with cycling because both use muscles in different ways. For that reason, almost reluctantly, he headed on to the two-wheeled sport.
He quickly rose up the amateur ranks and, in 1941, while Belgium was already occupied by the Nazis, he turned professional. In h…
Posta un commento
Continua a leggere
Altri post