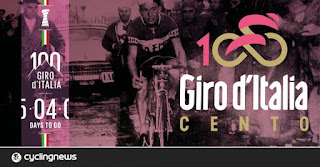 http://www.cyclingnews.com/giro-ditalia/preview/
The 100th edition of the Corsa Rosa celebrates a hundred years of the Giro d'Italia and so is also a celebration of Italian cycling and Grand Tour racing that will last three weeks, 21 stages, and this year, a total of 3612 km.
This year's tough, but finely balanced route, and a peloton packed with overall contenders of different talents promises to make the Giro 100 a special race.
The 2017 Giro d'Italia will, naturally, recall the rich history of Italian cycling also give a two-wheeled tour of Italy's culture, history and sheer beauty. It should be three weeks of celebrating everything Italian and three weeks of great racing. What more could we want in May?

Going into the final weekend of the 2016 Giro, nobody thought Vincenzo nibali had a chance of winning the pink jersey, but a last-ditch attacke gave him his second overall vicotry in the race. The 'Shark of Messina' tells Procycling why he has high hopes of joining the greats with a third title this year
by Stephen Farrand, Procycling, May 2017
Winning this year’s Giro d’Italia would put Vincenzo Nibali in an élite group of just eight riders who have won the Corsa Rosa three or more times. His name would also go down in the records as the winner of the 100th edition of the race, cementing his status as the best Italian rider of his generation.
Yet the fame, attention and records mean little to Nibali. He is on a far more personal journey. He moved to Tuscany from his native Sicily when he was just 16, to follow his ambitions, convinced of his talent and driven by his inner, very personal, determination.
“I don’t think I need to prove anything to anybody else except myself,” Nib…
Posta un commento
Continua a leggere 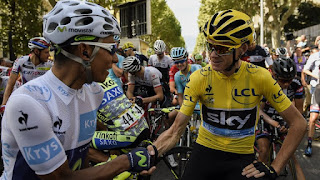 by Edward Pickering, Procycling, May 2017
The news that Nairo Quintana is racing the Giro and Tour to win both was greeted with a healthy dose of scepticism in the cycling world when it was announced. You only have to look at the recent history of this endeavour to understand why. Nobody has won both since Marco Pantani in 1998, complicated enough in itself because EPO abuse was rife at the time. Since then, nobody has achieved a podium in both events in the same year, let alone won them. In fact, only two riders have finished in the top 10 of both events in the same year (and not been disqualified for doping offences): Denis Menchov in 2008 and Alejandro Valverde in 2016. Alberto Contador came fifth in France on the back of a Giro win in 2011, but he was jaded in the later event, and it was all rendered moot by his subsequent disqualification.
These results say it all. The challenge flies in the face of modern coaching theory. Building a peak to win the Giro is simple, but having ti…
Posta un commento
Continua a leggere
Altri post