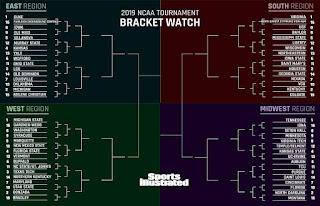 In a season with no truly dominant team, five have shown the ability to bounce back from injuries and bad losses, emerging as the clear favorites to reach Minneapolis. Which one will wield the ceremonial scissors on April 8?
BY DAN GREENE
Sports Illustrated, March 25 - April 1, 2019
EVERYONE enters the Madness with scars. After Michigan fell to Wisconsin on Jan. 19, each of the 353 Division I men’s basketball teams had at least one loss; entering the NCAA tournament, all have been beaten at least three times. Even the best programs endured notable struggles.  Duke treaded water during the six-game absence of the nation’s most brilliant star due to the freak explosion of his sneaker.  Gonzaga reached No. 1 in the polls two separate times, only to lose twice in a row the first time and suffer a shocking West Coast Conference championship defeat the second. Kentucky began its season by getting the blue blood beaten out of it (118–84 to Duke).  In November, North Carolina’s performance had …
Posta un commento
Continua a leggere

“TOUGH AS OLD BOOTS”: LOOKING BACK AT WALTER GODEFROOT 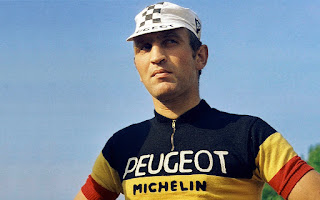 http://capovelo.com/tough-old-boots-looking-back-walter-godefroot/
article by Graham Jones
In his native Flemish tongue, they would call him a flahute. In English ‘tough as old boots’ would be an appropriate epithet. Either way Walter Godefroot has had an astounding career at the top level of professional racing to which, at the age of 62, he has just decided to bid adieu. The current generation knows Godefroot as one of the most successful directors sportif, as the long-time leader of the T-Mobile squad (which was called Team Telekom when he first joined the team in 1992).
Born in 1943 in Ghent, he turned pro in 1965 and for 15 years performed at the highest level; he is a true Flandrian. In modern times, Andre Tchmil reminded me of Godefroot. Such riders thrive in the northern classics with foul weather and endless cobbles. They can leave their adversaries groveling behind them or deliver the coup de grace with a killer sprint at the finish.
My preferred memories of Godefroot go back …
Posta un commento
Continua a leggere 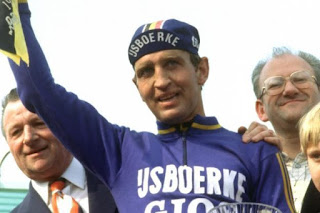 Procycling looks back atthe life and career of Walter Godefroot, who won virtually every classic over the course of a long career and who could be described as the archetypal Flemish pro

There’s a framed photo of Walter Godefroot on the wall of my office, filched from a copy of the long defunct Miroir du Cyclisme magazine. The image, which has likewise long since disappeared from the picture archives, is from Paris-Roubaix in 1978, when Godefroot was close to the end of his career but nonetheless came in 11th. He’s shot from the side, from a motorbike, and is pin-sharp, especially his eyes, which are fixed on what lies ahead. Behind him, ranks of furrows fade away across a ploughed field to a distant, rain-drenched horizon.
Like a rugby player who has just come off the pitch on a filthy wet day, Godefroot is covered in mud; absolutely plastered. He has clearly crashed and fallen heavily into a puddle on his left side. His yellow IJs…
Posta un commento
Continua a leggere
Altri post