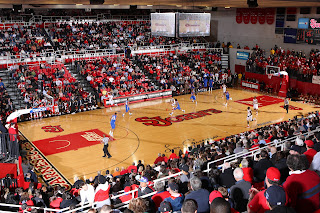 Formerly known as Alumni Hall, Carnesecca Arena opened its doors in December 1961 and is the on-campus facility for the men and women's basketball teams, fencing teams and volleyball team. In 525 games at Carnesecca Arena, St. John's men's basketball has compiled a 443-83 (.842) record, including a 79-65 win against Georgetown University in the first ever game played in the arena.

The University renamed the court in the fall of 2004 and building as part of a dedication ceremony honoring St. John's Hall of Fame coach and longtime mentor Lou Carnesecca. Along with the renaming, the University approved a plan to renovate the building.

Beginning in 2005, Carnesecca Arena underwent more than $30 million of renovations in a three-year period.  The new floor plan expanded the lobby of Carnesecca Arena, which now honors past and present St. John's teams with displays of championship hardware.  New ticket windows were stationed outside the front entrance allowing easy…
Posta un commento
Continua a leggere

Getting To Know...Creighton's Maurice Watson, Jr.

12/18/2015 1:27:00 PM
By Sean Brennan, Special to BIGEAST.com  In our latest installment of GETTING TO KNOW we go one-on-one with Creighton's rising star Maurice Watson Jr. The 5-10 junior point guard, who scored the second-most points in the history of the Philadelphia Public League (yes, even more than a guy named Wilt Chamberlain), clues us in on what it was like playing for his dad in high school, why he chose to leave Boston University after two very successful seasons, how long it took him to decide that he would look really good in Creighton blue and white and how an East Coast guy, who is leading the Bluejays in assists and is second in scoring, is living the dream in Omaha.

BIGEAST.com: You played for your dad, Maurice Sr., at Boys' Latin High School in Philadelphia. What kind of influence did he have on you and your basketball career?

WATSON JR.: "My dad never pulled any punches with me. He told me everything straight and he just set me up to be able to handle…
Posta un commento
Continua a leggere
Altri post