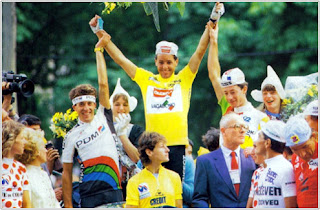 http://www.cyclismas.com/biscuits/1987-part-nine-well-always-have-paris/
By fmk · On July 13, 2012
The 1987 Tour enters it’s final weekend. The Tour Féminin likewise draws to a close. Twenty-five years on, how should 1987 be remembered today?
The 1987 Tour de France’s final transition stage saw the peloton tackling the 225 kilometres from St Julien en Genevois to Dijon. The riders took things easy until an eight man break got away thirty-some kilometres out from home, containing Panasonic’s Henk Lubberding (architect of the attack) and his team-mate Eric van Lanker along with Jean Claude Leclercq (Toshiba), Frédéric Brun (Z), Régis Clère (Teka), Alfred Achermann (Kas), Rudy Patry (Roland) and Gerrie Knetemann (PDM). In the final kilo Clère, ever the escape artist, managed to break free of his brothers in arms and held on by three seconds to take the stage. For Teka it was back-to-back stage and for Clère it was a second stage victory, following Millau. Superconfex’s Jean-Paul van Popp…
Posta un commento
Continua a leggere

The Tour’s Wicked Step-Mother? (Part 3 in a series)

http://www.cyclismas.com/biscuits/marie-odile-amaury/
(Part 3 in a series)
By fmk · On September 30, 2011
In the third part of our ongoing series addressing some of the key issues in the revenue sharing debate we bring the story of the Amaury family up to the current era and consider the Amaury Empire’s matriarach, Marie-Odile Amaury, and the role she played in bringing an end to the ProTour Wars.
For the French media, the seventy-year-old Marie-Odile Amaury is an enigma.
Despite her role at the helm of one of France’s wealthiest family businesses Amaury considers herself a private individual, not a public figure. She’s rarely photographed. Maybe it’s the lack of photographic evidence that causes so many commentators to note her blonde hair, blue eyes and freckled face. She is often presented in the French media as being somewhat reclusive or portrayed as an unlikely millionaire. Heavens to Betsy, commentators love to note she drives a Peugeot 308!
She herself claims to have no social…
Posta un commento
Continua a leggere

The Rise of the Amaurys (Part 2 in a series) 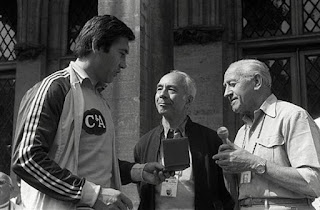 http://www.cyclismas.com/biscuits/philippe-amaury/
(Part 2 in a series)

By fmk · On September 29, 2011
In part two of our ongoing series addressing some of the key issues in the revenue-sharing debate, we consider the next phase in the history of one of that argument’s key-players: the Amaury family. In this episode we sprint quickly through the second half century of the Tour’s history and consider how the Amaury dynasty coped with the handover to the next generation of the family empire.
Having talked his way into co-ownership of the Tour de France in 1947, Émilien Amaury put one of his own men inside the Tour to watch over his interests. That man was Félix Lévitan, the editor of Le Parisien Libéré‘s sports pages.

The Tour’s Godfather
Félix Lévitan had begun his working life at the magazine, La Pédale, in the late thirties before taking up a position with L’Auto. During the war, amid the various round-ups of Jews, he was interned first in a military camp in Paris, then later in Dijon…
Posta un commento
Continua a leggere 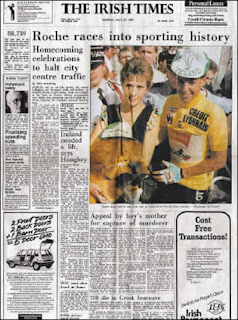 http://tdfheroes.blogspot.com/p/project-overview.html
While one of the very few cyclists, in fact only the second of two, to have won a triple crown in cycling (the Giro d'Italia, Tour de France, and World Road Race Championship) in one year, a cloud of suspicion sits over Stephen Roche's head. He faces allegations of doping by numerous bodies and individuals due to a reported connection with professor Conconi, known for conducting tests with EPO. Especially damning to Roche's reputation has been the fact that two very prominent Irish journalists, Paul Kimmage and David Walsh, have explicitly stated that they believe Roche was guilty of doping. While Roche remains the Irish "native son" of cycling, an air of uncertainty certainly looms over that title.
Similar to Steve Bauer in Canada around the same time, Tour de France exposure was nowhere near as large as it is today in the late 1980s and Stephen Roche's heyday. Moreover, like Bauer, he spent most of his s…
Posta un commento
Continua a leggere

The Man Who Sold the Tour (Part 1 in a series) 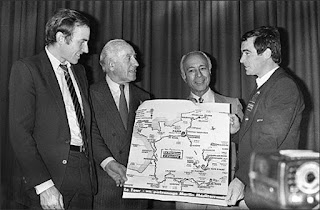 (Part 1 in a series)
By fmk · On September 28, 2011
In the first part of a series of articles addressing some of the key issues in the revenue sharing debate we consider the early history of the Tour de France and how the Amaury family came to wield power over the race.
Tour de France history 101 tells us that, away back in 1900, a French sports paper was created as a rival to Pierre Giffard’s then dominant Le Vélo. With the assistance of fellow industrialists Adolphe Clément and Edouard Michelin, Jules-Albert (the Comte) de Dion launched L’Auto-Vélo. Henri Desgrange and Victor Goddet – who were making names for themselves managing the Parc des Princes vélodrome – were brought on board to act as editor and financial controller.
Initially, things went well for the men at L’Auto-Vélo but by the closing months of 1902 the future was looking far from bright. Their rival, Le Vélo, was challenging their right to include the word “…
Posta un commento
Continua a leggere

- maggio 17, 2019
They have controlled the Tour de France for 70 years and now own many of the sport’s biggest races. Famously private and vigorously protective of their interests, the Amaury family holds the key to cycling’s financial future

Meet the Amaurys, the family at the centre of professional cycling’s Game of Thrones. Over three generations, they took control of the Tour de France and its newspaper partner L’Équipe. Since then, they’ve tightened their grip, resisting all attempts to establish any form of power-sharing, particularly with regard to the huge revenue stream that the Tour generates each year.
This April, their hold on the Tour and a rapidly growing portfolio of events run by Amaury Sport Organisation (ASO) became even firmer when they bought up the 25 per cent stake in parent company Éditions Philippe Amaury. Now EPA’s president Marie-Odile Amaury and her two children, ASO president Jean-Étienne and EPA board member Aurore, own 100 per cent of EPA’s stock, ma…
Posta un commento
Continua a leggere
Altri post