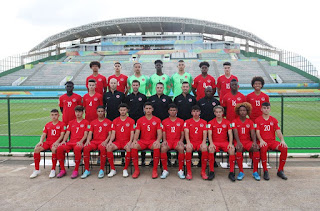 Although the 2019 edition will be Canada’s seventh appearance at the U-17 World Cup, their track record is less than impressive. While their maiden adventure in 1987 was enjoyable in their role of hosts, they have never made it past the group stage and only twice in the last 24 years have they qualified for the finals, at Mexico 2011 and UAE 2013.

After finishing second to USA in the group stage, Canada went on to beat Curacao 3-0 to reach the quarter-finals. They then impressively knocked out Costa Rica, coming back from 1-0 down to take the tie to extra-time and win 4-3 on penalties. While this was enough for a ticket to Brazil 2019, they fell at the next hurdle to the Stars and Stripes and missed out on what would have been only their second-ever Concacaf U-17 Championship final.

https://www.fifa.com/u17worldcup/teams/team/1889551/profile/
FIFA U-17 World Cup history
There will be a new African representative at Brazil 2019: Angola. The young Palancas Negras upset the odds by not only reaching the semi-finals of the 2019 CAF U-17 Africa Cup of Nations, but also by beating Nigeria 2-1 in the match for third place.
Road to Brazil 2019
Angola put in the greatest performance in their history at the U-17 Cup of Nations, only losing out to Cameroon on penalties (4-3) after a 0-0 draw at the semi-final stage. Earlier in the competition, they had clinched a creditable second place in a tough group that included Nigeria, Uganda and hosts Tanzania.
The coach
Portuguese-born Pedro Soares Goncalves took charge of Angola’s U-17 side in 2018, having previously coached at the academy run by Primeiro d’Agosto – one of the African country’s major clubs – since 2016, and at Sporting Lisbon’s academy prior to that.
Did you know? Angola’s squad boasts the top scorer from the 2019 U…
Posta un commento
Continua a leggere

https://www.fifa.com/u17worldcup/destination/stadiums/stadium/400066915/
Opened in 1977, the Estadio Bezerrão is situated in the administrative region of Gama, 30 kilometres from Brasilia, the capital of Brazil.
The stadium has hosted Copa do Brasil matches and its most recent renovation was marked by a friendly between Brazil and Portugal, a game that ended in a 6-2 win for the hosts.
Brazil’s U-23 team used it as a training base for the Men’s Olympic Football Tournament Rio 2016.
The stadium will host 12 matches in the group phase of the FIFA U-17 World Cup Brazil 2019 – including the opening match – two Round-of-16 ties, both semi-finals and the final.
Fact file: Official name: Estadio "Walmir Campelo Bezerrão" Opened: 1977 Last renovated: 2008 Capacity: 14,710