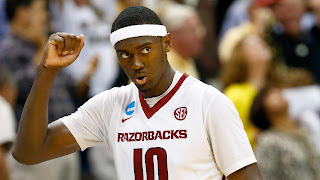 —by EVIN DEMIREL, Slam magazine
Earlier this year, the jersey numbers of Sidney Moncrief and Corliss Williamson were raised to the rafters of Arkansas’ Bud Walton Arena. Perhaps no Razorback better links these two legends than a 20-year-oldsophomore looking up at the honorary banners.
Bobby Portis rose from gangly project at Moncrief’s high school alma mater to become Arkansas’ first SEC Player of the Year award winner since Corliss Williamson 20 years ago. Corliss Williamson was one of Portis’ AAU coaches in Little Rock. He helped Portis as a young teenager deal with anger issues and develop a strong work ethic. The two have remained close. “He’ll text me ‘Good game’ or something like that,” Portis says.
The congratulations poured in for Portis during the ’14-15 season. The 6-11 power forward racked up 17.5 points and 8.9 rebounds a game while leading Arkansas to 27 wins. The Hogs returned to the NCAA Tournament after a seven-year drought. And Por…
Posta un commento
Continua a leggere 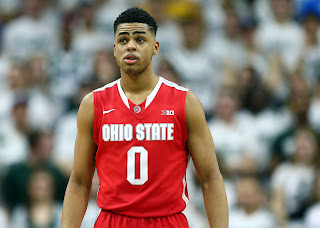 Ohio State, 6-5, G, Fr
— by AGGREY SAM
Phil Jackson isn’t alone in his admiration of D’Angelo Russell.
The Knicks president, a front-office novice, was fined for commenting about the Ohio State freshman, who will have made a decision about whether to return to school or be a top-5 pick in the 2015 NBA Draft by the time you read this. However, as of press time, the 6-5 combo guard is coming off arguably the worst performance of his otherwise stellar campaign, shooting 3-19 in a seasonending Tourney loss to Arizona.
But don’t think for a second that rough outing will affect how he’s perceived in the eyes of NBA evaluators.
“I’m not sure his stock can get any higher than it is now,” another NBA personnel man says after watching Russell in the game. “Some people put a lot of stock in the Tournament, but there’s so many positives in his game that in his case, it doesn’t matter.
“If you watched him play last spring, he wasn’t one of those guys who stood out on the [HS] circuit,” he explains, o…
Posta un commento
Continua a leggere

JAHLIL OKAFOR: ONE, BUT NOT DONE 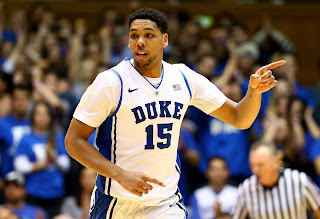 FRESH OFF LEADING THE BLUE DEVILS TO A NATIONAL TITLE, JAHLIL OKAFOR IS ALREADY LOOKING AHEAD. HEY, NBA: YOU READY?
- by DeMarco Williams, Slam Magazine
It’s a fairly typical Saturday morning in Durham, NC. Basketball legend David Robinson and his son Justin just happen to be placing their orders at the omelet stand at Fairview Dining Room, the signature restaurant at Washington Duke Inn & Golf Club, a luxury hotel not a 10-minute walk from Cameron Indoor Stadium.
Now, we don’t know what reason David’s family had for being near Duke’s campus that particular Saturday beyond the morning spread — of course, the 6-7 Justin is slated to join Duke’s basketball team next season as a walk-on — but, at 1 p.m., the Robinsons were all inside Cameron for a hyped ACC showdown between Duke and Notre Dame. Can’t really blame them, either. Both rosters were loaded with NBA-caliber talent: The Fighting Irish had Jerian Grant and Zach Auguste while the Blue Devils marched out Justise Winslow, Tyu…
Posta un commento
Continua a leggere 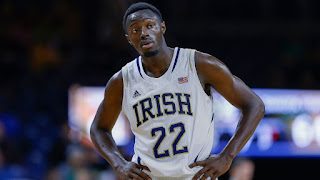 Notre Dame Fighting Irish, 6-5, PG
— by DEMARCO WILLIAMS, Slam magazine
Constantly having to prove yourself can either weigh you down or inspire you. Jerian Grant leans toward the latter. Being raised in a house of ballers — Jerian’s pop is 11-year NBA vet Harvey Grant; his uncle is Chicago Bulls stalwart Horace Grant; his brother Jerami plays with the Philadelphia 76ers; his other brother Jerai played professionally overseas — Jerian, 22, had to let haters know early on that he had the game to go with the last name.
“They tell me to stay humble,” he says of his family. “As quickly as fame can come, it can be taken away. Just stay humble and hungry and wanting to get better — no matter how good it’s going or how bad it’s going.”
Things went steadily during Jerian’s first two years at Notre Dame, but just as the guard was on the verge of making headlines for his play in late 2013, he became the talk of South Bend for missing the second half of his redshirt junior season for academic ine…
Posta un commento
Continua a leggere 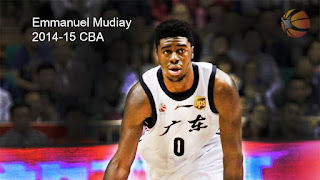 HAVING STARTED HIS PRO CAREER IN CHINA, CONGOLESE-AMERICAN HOOP STAR HAS ALREADY SHOWN HE HAS THE TALENT AND COURAGE THAT LEGENDARY CAREERS ARE MADE OF
by Karan Madhok, Slam Magazine, March 2015
It’s 2014, and 18-year-old Emmanuel Mudiay is learning about a new city. As he tries to familiarize himself with Guangdong in Southern China, he dabbles in learning a little bit of Mandarin, embracing the new culture, dealing with the bumps and grinds on the basketball court and the attention a blossoming star gets off of it.
It’s 1999, and 3-year-old Mudiayhas picked up a basketball for the first time in his life. He knows what the round object is, but beyond feeling the texture of the ball, he doesn’t think much of it. In Kinshasa, the capital of DR Congo and Mudiay’s birthplace, there are more pressing matters to consider, like the Second Congo War, which turns into the deadliest confict on Earth since World War II.
It’s 2002, and Mudiay has a basketball in his hands again. He’s 6 years old…
Posta un commento
Continua a leggere 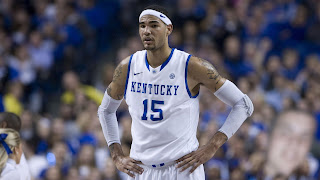 Kentucky, 7-0, C
by Bill DiFilippo, Slam Magazine, March 2015
When you think of Kentucky, you think of teams with players who go to school for a year out of necessity. Odds are, you’ve heard the phrase “pro factory” used to describe John Calipari’s Wildcats, because no school churns out NBA players quite like UK.
Willie CauleyStein is different. The 7footer is in the middle of his third year in Lexington, which is... unusual.
UK squads are supposed to be made up of star freshmen and sophomores. The juniors and seniors are supposed to be scarcely used walkons who play in garbage time.
Instead, CauleyStein gives the Cats an impact player with two rare commodities in Lexington: experience and veteran leadership.
While Calipari has never directly said that he wants the Kansas native to be a leader on the youth-laden Wildcats, Cauley-Stein knows his coach wants him to step up. “You kind of can tell who he looks to as, like who he wants to make decisions or if he has a question, it’s gonna …
Posta un commento
Continua a leggere 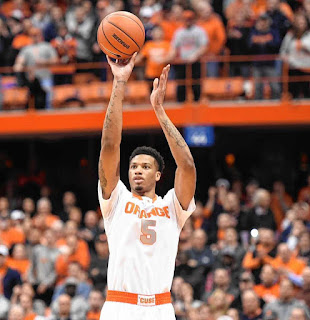 by Franklyn Calle, Slam Magazine, April 2014
Having spent his entire high school career away from home, Bronx product Chris McCullough, who started his prep odyssey at Salisbury (CT) School, has had his share of experiences. “I’ve been doing this for five years,” says McCullough, who’ll be attending Syracuse in the fall. “I moved away from my home at 13, so I’m used to it by now.”
It also didn’t take long for his skill set to show. As a sophomore, McCullough averaged 13.9 ppg, 7.7 rpg and 2 bpg, leading Salisbury to its frst NEPSAC Class A title in history after dropping 26 in the championship game.
He then transferred to Brewster (NH) Academy for his junior year, helping his new team capture the NEPSAC Class AAA title. But then came a roadblock.  Just days before the start of his senior season, he was dismissed from Brewster for violating school rules. “The lesson I learned is to be smart and make better decisions.”
Now finishing his high school e…
Posta un commento
Continua a leggere 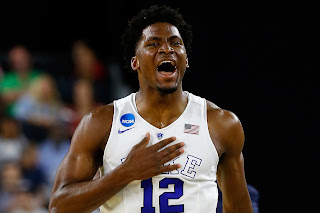 This isn’t the first time that Houston, TX, has a member of the Winslow family making noise on a national level. Rickie, the father, was a member of the legendary "Phi Slama Jama" dunking fraternity at the University of Houston, playing alongside Hakeem Olajuwon on the 1984 team that reached the NCAA national title game against Georgetown.
He was eventually drafted by the Chicago Bulls in 1987 and had a short stint with the Milwaukee Bucks before playing overseas.
Two of his kids are currently playing at the collegiate level: Bianca, a sophomore guard for the Houston Cougars, and Joshua, a sophomore playing football as a defensive back at Dartmouth.

As for the youngest Winslow, Justise, the 6-6 lefty has basically been a double-double machine throughout his high school career.
As a freshman, Winslow averaged 15.3 points and 9.6 rebounds, leading St. John’s to its first SPC Division 1 title since 1…
Posta un commento
Continua a leggere 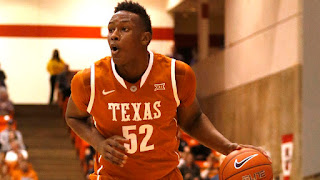 TEXAS BIG MAN MYLES TURNER MIGHT BE THE BEST PLAYER IN THE 2014 CLASS.  AND HE’S ABOUT TO MAKE ONE COLLEGE FAN BASE VERY, VERY HAPPY
WORDS: RYAN JONES, Slam magazine, June 2014
Myles Turner is the guy everyone is waiting on. A consensus top-10 player in the 2014 class — and, in the eyes of many, the nation’s No. 3 overall prospect behind fellow big men Cliff Alexander and Jahlil Okafor — Turner is pretty much the only high impact recruit in the country not to have announced his college choice. He’s got his reasons, including a desire to see how various recruiting classes shape up, and wanting more time to develop relationships with the coaches doing the recruiting. But there’s another reason that comes as a pleasant surprise.

“My teammates are like family to me,” he says, “and with all these coaches coming through here, it’s a chance to get them some looks as well.”
To hear Trinity (TX) High coach Mark Villines tell it, that selflessness is one of Turner’s defining traits. “He could’ve …
Posta un commento
Continua a leggere

RASHAD VAUGHN: WHAT HAPPENS IN VEGAS… 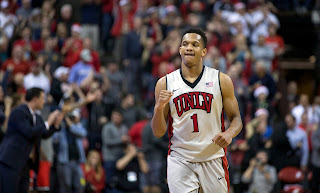 Las Vegas (NV) Findlay Prep, 6-5, SG (born: 1996)
by FRANKLYN CALLE, Slam magazine, June 2014 As the top uncommitted guard in the nation for the Class of 2014, Rashad Vaughn’s college announcement this past February (2014) had the recruiting world’s eyes on him.
Choosing between three historic programs in UNC, Kansas and Kentucky, and two rising ones in Iowa State and UNLV, the 6-5 shooting guard’s final five were all legit. But after relocating to Nevada to play at renowned Findlay Prep, after transferring from New Hope (MN) Robbinsdale Cooper following his junior year, Vaughn ultimately decided to stay in Vegas.
“I kept going back and forth and didn’t know until the day I was going to announce,” says Vaughn, who averaged over 20 points, 5 rebounds and 4 assists per on a stacked squad. “But with Coach [Dave] Rice and the relationship we built from the start, and also just the blueprint that he showed for me, plus the relationship I already had with Dwayne [Morgan] and Goodluck [Okonobo…
Posta un commento
Continua a leggere
Altri post