Tommy Conlon: A most astonishing accident of history 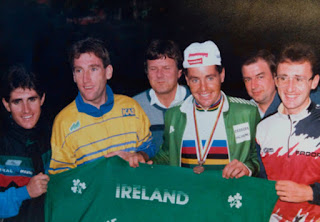 https://www.independent.ie/sport/other-sports/cycling/tommy-conlon-a-most-astonishing-accident-of-history-36206427.html
by Tommy Conlon October 8 2017 4:30 PM
Not to put too fine a point on it, but if you want to find a symbol that summarises professional cycling in all its cruelty, heroism and treachery, you need look no further than Seán Kelly's bony backside.
In 1987, this lion of the road was among the favourites to win the tour of Spain, La Vuelta a España. With four days to go, he was leading the race by 43 seconds; the next day he abandoned. Turned out he'd been suffering with a cyst on his perineum, caused by an ingrown hair.
An online medical dictionary tells us that the male perineum is located between the scrotum and the anus. One can only imagine that a bike saddle is the last place where you'd want to be sitting with such an affliction. Kelly sat on it for four days, pounding out mile after punishing mile. The agony must have been exquisite.
The night before …
Posta un commento
Continua a leggere

When Sean Kelly first began to earn selection for the Irish national team as an amateur in the mid-1970s, he regularly found himself competing for jerseys with his teammates. Not rainbow ones, mind, but the notoriously ill-fitting garments provided by the Irish Cycling Federation at the time. Alan McCormack, regularly Kelly’s equal in the sprint as a junior, was rather slighter of build than the robust farmer’s son from Carrick-on-Suir, but he was never guaranteed the snuggest jersey on offer.
“They’d be laid out on a bed and Sean would grab my jersey, saying he liked a nice tight fit,” says McCormack. “Jesus, the medium would be like a dress on me, so I used to have to fight him to keep my small jersey. They were pure cotton and they’d sag in the rain.”
Come the 1987 World Championships in Villach, Austria, after a decade climbing inexorably to the summit…
Posta un commento
Continua a leggere 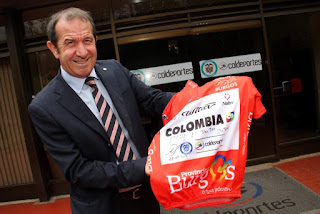