STEPHEN ROCHE - A STUDY IN THE V 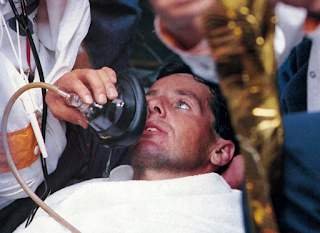 https://www.velominati.com/nostalgia/stephen-roche-2/
Aug 13 2011 - by scaler911
I hold a special place in my heart for the Irish. Both sides of my family are from the Emerald Isle, and I’ve done some traveling there. Early in my racing career, I started following the Euro-pros and was drawn to the strong men of Belgium and Ireland. The list is of course topped by King Eddy. In close second, I give you Stephen Roche.
Early in his pre-contract days, Roche had to “…win, or go back to Ireland…” to work a machine shop at a dairy. That season he won the amateur version of Paris-Roubiax.
In his debut professional season, 1981, Roche threw down The V on none other than Le Blaireau himself at the Tour de Corse. And it’s not like Hinault was at the end of his career; he had already had won three Tours, the Vuelta, the Giro, and was currently wearing ‘The Hoops’ around his torso. Less than a month later, Roche won Paris-Nice even though he was ill.
In the ’87 Giro, Roche was to be riding in sup…
Posta un commento
Continua a leggere
Altri post