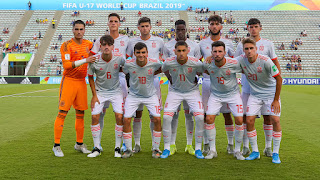 https://www.fifa.com/u17worldcup/teams/team/1882398/profile/
FIFA U-17 World Cup record The likes of Dani Garcia, Iker Casillas, Xavi, David Silva, Cesc Fàbregas, David De Gea, Koke, Isco and Alvaro Morata have helped Spain admirably finish on the podium in 6 of their 9 appearances at the tournament. La Rojita own, however, an unwanted tournament record of having lost in all 4 of the finals they’ve made – to Ghana (1991), Brazil (2003), Nigeria (2007) and England (2017). The road to Brazil
A 1-0 win over Germany, courtesy of a goal from Juventus starlet Pablo Moreno, proved central to Spain reaching the UEFA U-17 Championship’s knockout phase, where despite monopolising possession in their nationally-trademarked fashion, they required penalties to sink Hungary and book a Brazil trip. La Rojita suffered a last-gasp defeat to the Netherlands in the semi-finals.
The coach
David Gordo coached in the Spanish lower leagues before beginning to work with the Spanish youth teams in 2013, initial…
Posta un commento
Continua a leggere
Altri post