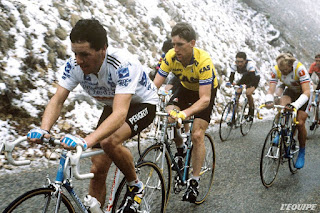 https://www.podiumcafe.com/2011/3/2/2025003/ParisNiceKellyRoche
Paris-Nice - the Irish years. By Feargal McKay@fmk_RoI Mar 2, 2011
For eight years in the eighties, Paris-Nice was an Irish race. Between Stephen Roche's win in 1981 and Sean Kelly's last visit to the top step of the podium in 1988, no other nation took victory in la course au soleil. An impressive enough stat. Made even more impressive when you look at the history of the race: it's never happened before.
The story of Paris-Nice's Irish years is very much the story of Ireland's two stars of the era, of who they were, where they came from and how they came to make the impression on European cycling that they did. And that story begins with the man from Carrick-on-Suir, Sean Kelly.
When Kelly turned pro and joined Flandria in 1977 the team was split into two squads. The main one - DS'ed by Guillaume (Lomme) Driessens - was based in Belgium and was headed by Freddy Maertens and Michel Pollentier, with…
Posta un commento
Continua a leggere
Altri post