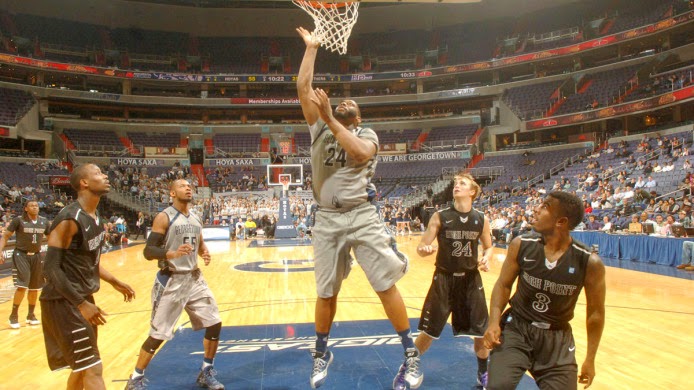 
Hey, speaking of 2010 McDonald’s All-Americans with weight problems…
Before I offer my thoughts, let’s check in with the Georgetown fans to see how they felt about year one of the Joshua Smith Experience: [georgetownfingers...].

Yep, pretty much what I expected.

What makes Smith so frustrating is that he’s so freaking good. Well, he’s good at being immovable, catching the ball, and putting it into the basket. Outside of that, he can be a huge liability. He’s an awful defender (especially at hedging on ball screens), he doesn’t rebound as well as he should, it takes him half the shot clock to get down the floor, he’s almost always in foul trouble, and he doesn’t have the stamina to play for more than half of the game. But holy smokes: When Smith has it going, he’s unstoppable. That’s why it’s so hard to give up on him. His game has plenty of warts, but underneath those blemishes there’s an unparalleled beauty that leaves your mind full of possibilities, almost all of which begin with If he could just …

But what if he can’t? I mean, it’s been more than four years now. Why should we believe that this year will be different? I know, I know. Smith has finally gotten himself into shape. Yeah, we say that every year, but this time we mean it! Just look at this Hoya Madness promo pic. You can almost see his muscles! There’s no way he would ever let himself fall back out of shape between the time that picture was taken and the beginning of the season. Like, there’s no way he would ever weigh around 310 pounds in the offseason but then look well over 350 pounds once the games started. That would never happen!

In all seriousness, I hope like hell that Smith can figure it out. The Hoyas started 10-3 last season before Smith was ruled academically ineligible. They went 8-12 with him out of the lineup. Sure, their early success probably had as much to do with an easy nonconference schedule as anything else, but there’s no denying that Smith’s presence — especially when he was on his game — made the Hoyas a far more dangerous team. With D’Vauntes Smith-Rivera and Jabril Trawick on the perimeter, if Smith can bring it down low 20 to 25 times this season like he brought it against Oregon last year, Georgetown is a Sweet 16 team at the very least.