Something to Keep an Eye On: Greg McDermott’s Next Chapter 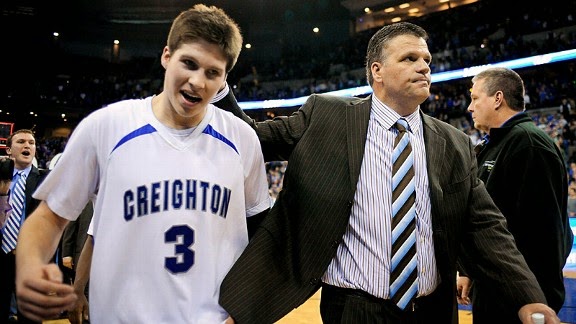 Is Greg McDermott a good coach?
On one hand, his pre-Creighton résumé is unimpressive: zero NCAA tournament wins, 4 straight losing seasons at Iowa State, and zero regular-season conference championships at the D-I level. Hell, one could argue that his Creighton tenure has also been lackluster, since his Bluejays couldn’t even make the Sweet 16 with one of the best college players of this generation. I’m not in that camp (no matter the circumstances, 107 wins in 4 years ain’t easy), but I get it. It’s easy to think that Gregg Marshall, Shaka Smart, or Brad Stevens would have done more with Doug McDermott.

Then again, since Doug is Greg’s son, Greg must have done a good job coaching Doug into the player he is today. And let’s be real here — it’s not like Creighton had much talent surrounding Doug. I mean, Ethan Wragge played like he was wearing an electro-shock collar that buzzed him anytime he got within 30 feet of either rim, and Grant Gibbs was so old that I’m pretty sure his medical redshirt year was due to gout.
The 2014 Creighton team was a house of cards that was built to shoot a billion 3s and play no defense. Maybe Greg McDermott should have tried to construct a more well-rounded team, but Creighton also doesn’t have the status and cachet to lure the kind of talent that ends up at Kentucky or Kansas. Those Bluejays were fun to watch, they could bury any opponent if they all got hot at the same time, and they won a slew of basketball games. But they were always destined to crash and burn in the NCAA tournament, even with Doug McDermott leading them.

With Doug off to the NBA, it should be fascinating to see what Greg does next at Creighton. This, of course, is assuming that he doesn’t decide to walk away in mid-January when the Bluejays are .500 and just move to Chicago to follow Doug’s NBA career.
College Basketball Creighton Inside Look NCAA