Robert Millar on the 1987 Giro 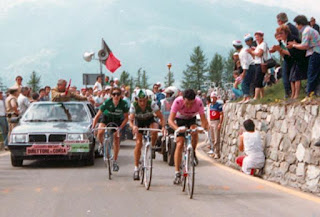 How Roche and Millar worked at securing first and second places

I wasn’t supposed to be at the ’87 Giro d’Italia at all but Panasonic team boss Peter Post surprised me barely ten days before the start. I was first reserve, apparently, but I don’t remember him saying who I replaced or why. It was probably Post’s idea of punishment for me arguing about whether I had to eat my crème caramel at the recent GP Zurich when he’d said I needed to. Or possibly for letting former Panasonic rider Beat Breu win a mountain stage at the Tour de Romandie. Post hadn’t talked to me for three days after thatscandal.

So, reluctantly, I found myself at the start of the Giro to support Phil Anderson on the climbs. Post made it quite clear who was leading the team and who was there to help. I didn’t have any problems with that as it wasn’t a race I had planned for. Skimming through the road book the night before the first stage was a bit of a shock as it looked really hard but I thought I could take it easy some days and keep something back for the Tour de France, which came three weeks after the finish.

I also thought it might be a good idea to try and win the climbers prize. If I was going to be riding for the others in the mountains then I could get the points on the earlier climbs, do my work and then get dropped before the finish. I’d get a jersey to wear so there’d be less kit to wash too.

So the race took its course for the first few days, Erik Breukink took the race lead for Panasonic then we lost it to Carrera. I was leading the mountain classification but a young guy from Carrera called Claudio Chiappucci was making it hard, so when Roche made me an offer of backing off Claudio in return of some possible favours later, I accepted. I told him I wouldn’t ride against him and would help if it suited what Panasonic were doing. That seemed a reasonable deal as Stephen knew I wasn’t happy to be at the Giro or with the treatment Post was giving me at most races. He had already told me he was leaving Carrera to set up at Fagor and had asked if I was interested but at the time, I didn’t have an answer.

There was a nasty vibe at Carrera with Roberto Visentini doing his prima donna stuff – screaming and shouting if you so much ad bumped into him in the bunch – so when the crap hit the fan the day Roche attacked him, we just sat and watch it all unfold. You need friends in those situations and Visentini didn’t have any. Worse still, he’d made plenty of enemies.

The first few days after Stephen re-took the leader’s jersey it was pretty hostile, with the crowds booing and spitting. On a couple of occasions, I rode with Eddy Schepers on the front of the group and Roche hid in the middle. While I’d been through the same kind of abuse at the Vuelta occasionally, it seemed nastier at the Giro that year. The strategy at Panasonic had changed from looking after Anderson to looking after Breukink, with Post’s big plan to wait for the final time trial where Erik would win the GC, so my riding on the front now and then suited to everyone.

Well, everyone except Visentini, who was getting stroppier as the race went on and we wound him up. Like when Roche punctured one day and Visentini started riding straight away but when he asked for help, we shrugged our shoulders as we’d done on the day he’d lost the lead. A bit of bouncing off him on the last hour of every stage went down well too.

Normally he was a bag of nerves but by the end of the third week he was half crazy. On the last mount finish, when he rode into my back wheel, fell off and split the group, he even said I had done it on purpose but I didn’t hanging on so I never even noticed he was gone until Marino Lejarreta and Roche accelerated. With Breukink behind, I excepted Post to have me wait but he told me to control Roche so I stayed on the wheels until the last kilometre then took off for the win. That felt bad as I had sat but when I got back to the hotel, Post was complaining I should have attacked earlier. If I had though, he would have complained that I had added to Breukink’s losses. To add insult to injury, he then told to everyone that Breukink was strong enough to surely take back second on GC from me.

I was annoyed because I had done what he’d wanted the whole race . ride here, wait there – and stillPost wasn’t happy. So I rode the TT flat out and while Breukink beat me, it wasn’t enough to pass me and it wasn’t enough to bat Roche for the stage win either. I’d had my fill of Post’s tantrums and whims by then so I didn’t expect congratulations and he didn’t come up with one either. On the way back to the hotel after the final podium event, Fred de Bruyne, who was looking after that part of the day for the team, asked me if I had signed up with Roche at Fagor for the following year and I told him truthfully I hadn’t. I liked Fred – he was one of the good guys at Panasonic – but if he had asked whether I had decided to leave the good ship Post then I’d have been forced to give a more diplomatic reply.