We Can Meet Heroes 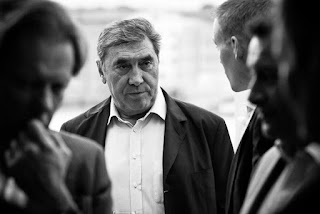 Most professional riders are lucky if they win one. And he is, as we all know, the greatest cyclist that will ever live. For this reason alone he is at the top of any cyclists’ list as the number one – the cycling hero to top all cycling heroes. So what’s a man so super-human really like? Finding that out is no small challenge. Eddy is an interesting foil for journalists: not that he’s impolite or terse or difficult or anything, really. He’s just – as the gentlemen of the press will tell you – ‘a bit tricky’. I’ve met him a few times and so it’s hard to fathom why I can’t seem to get him talking. He’s just a man after all. I’m not blaming him – he’s a nice guy, Eddy. It’s clearly my problem and a strange one at that, because you usually can’t shut me up. But when Eddy Merckx shakes my hand I just can’t get the words out… He won Milan-San Remo seven times, the first time at 20 years of age. Just a man, then, Eddy Merckx.

By matter of contrast Italo Zilioli was one of those riders who, by the sounds of it, rode a bike pretty much for fun. He was unlucky in that he was born into a time when the world was rich in cycling talent, but he doesn’t seem to mind: he’s happy to have been there even if it was on the second rung of the ladder and often in the shadow of his Belgian colleague. 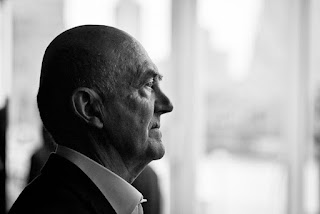 And these men agreed, through many strings pulled, mainly by the Sykes and Peracino contingent, to come to the inaugural Rouleur Supper Club, to help us launch Herbie’s new book, Maglia Rosa. I had to write that down, just to prove to myself that it actuallyhappened… Eddy turned up, he brought Signor Zilioli, his best friend in cycling, and Phil Liggett managed to stop them behaving like a couple of overactive school kids long enough for them to chat to our eager audience. Brilliant.

By his own admission Herbie Sykes was never much of a bike rider. However he is a great writer about bike riders as his latest work, Maglia Rosa, shows. Herbie pursued Giro winners all over Italy to tell the story of this great race, then tracked some down a second time to get them to sign the special editions – such is Herbie’s unquenchable dedication to the Giro and all things Italian.

Phil Liggett didn’t win many races either, but he can claim to have raced with Eddy, which in itself is palmares enough. As a journalist he’s been slightly more successful. One of his trade secrets is the unrivaled ability to get people to open up. I’ve had the dubious honour of sharing a few racing experiences with Mr. Liggett and for anyone wanting to have a stab at journalism, it’s an education. He has this extraordinary knack of sticking at his subject no matter how closed the interviewee may be and relentlessly pursuing, often making fun of them in the process, until he gets his answer. So when Eddy Merckx is on top billing, it’s better that Phil does the talking…

As the night progressed we learnt that Eddy Merckx and Italo Zilioli were more that mere racing acquaintances. These two were best pals when they were racing and it still shows. And it showed best earlier in the evening as they signed copies of Maglia Rosa before last night’s supper at the Blueprint Café. It’s a bit like watching two kids on the back seat of a school bus – punching one another and laughing. A close and enduring friendship made on the road regardless of any hierarchy, status or power.

I’m not sure if you should or shouldn’t meet your heroes, but noticing that they’re enjoying being out in London, and happiest in the company of fellow cyclists, makes you realise we’re all just a big band of brothers and sharing the experiences, albeit of those at the sharper end of the sport, has a strange way of bonding us closer together. That may sound a bit corny, but as one of our guests, Alan Sandell, who was more than happy to have met his ‘hero’ last night, told me as he left :

“I grew up with Eddy.”
Cycling Inside Look Rouleur