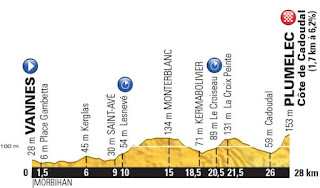 
STAGE FACT
Plumelec hosted a TTT finish in 1982 after the Tour’s initial TTT on stage five was interrupted by striking steel workers. Organisers stuck an impromptu 69km TTT on the morning of stage nine.

It’s less than 20 miles long, but today’s stage will be one of the ones that the Tour’s overall favourites fear the most. It is team time trial day: one of the most physically and technically demanding stages of the whole race. At the end of a long first week, riders will be hoping that they don’t slip up and concede crucial seconds going into the first rest day.

As if that wasn’t enough
TTT’s don’t always suit the best time triallists as they demand constant accelerations and decelerations rather than steady state efforts. They also require exceptional teamwork, with the time taken on the fifth rider to cross the line. As a team, do you choose to use up four riders to save the legs of the remaining five? Or do you ride together and share out the work? This TTT is made even trickier by the presence of 3 climbs, including an uphill finish in Plumelec called the Côte du Cadoudal.

What can we expect?
Some teams rarely practise team time trials so the disparity between top and bottom could be minutes rather than seconds. Orica-GreenEdge and Etixx-Quick Step always do well, while BMC won the TTT at the Critérium du Dauphiné in June. Movistar are pretty handy, as are Astana and Tinkoff-Saxo. Team Sky don’t have the best track record in the event, but spare a thought for Ag2r La Mondiale and FDJ.fr.
The French hopefuls like Romain Bardet and Thibaut Pinot could hemorrhage time today.
Ciclismo Preview Tour de France