EVERYTHING YOU NEED TO KNOW ABOUT THE EUROPEAN GAMES 2019 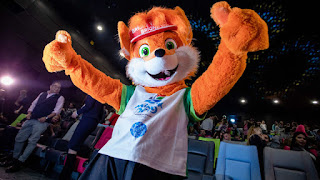 A total of 200 sets of medals will be awarded across 15 sports and 23 disciplines, with the action shown live on Olympic Channel (restrictions may apply).

Four years ago, at the inaugural European Games in Baku, Russia topped the medal table (164) from hosts Azerbaijan (56), and Great Britain (47).

Here's our guide to the storylines, sports, stadia, schedule, and stars to watch out for at the 2019 edition.

Sport events at the European Games 2019

In eight sports, these European Games count towards Olympic qualification (more details below).

In archery, table tennis, and shooting there are automatic quota places for Tokyo 2020 on offer.

Competitors in athletics, karate, badminton, cycling (road and track), and judo can boost their hopes of reaching the Games in Japan.

The judo and boxing competitions will also serve as European Championships.

Both are part of a strong Dutch team, which also includes 2017 road world champion Chantal Blaak and the 20-year-old up-and-coming sprinter Lorena Wiebes.

Here's a summary of how the qualification system works for each of the eight sports where athletes can punch their ticket for Tokyo 2020.

Where will the European Games 2019 take place?

The opening and closing ceremonies, and the athletics events will take place in the Dinamo Stadium.

Prior to recent renovation, the venue hosted seven matches, including a quarter-final, during the football tournament at the Moscow 1980 Games.

The Chizhovka Arena, which will stage judo and karate, was previously home to the 2014 IIHF Ice Hockey World Championships.

Gymnastics (artistic, rhythmic and trampoline) and track cycling will take place inside the multi-purpose Minsk Arena complex, one of Europe's most advanced sports facilities.

The Minsk Arena has previously hosted major events such as the 2012 World Junior Figure Skating Championships and the 2013 UCI Track Cycling World Championships.

The road cycling events will take place along the central avenues of the Belarusian capital.
Cycling European Games Inside Look Minsk 2019 Preview